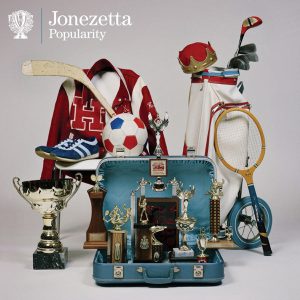 For me, indie rock is hit and miss; sometimes it can be pure pretentious futility, while other times it is profound and full of life.  Tooth & Nail made a wise choice in signing Jonezetta, who thankfully seem to fit the latter description.  While their sophomore record Cruel To Be Young was a respectable effort by the quintet, it was when they were a four-piece when their dance-rock melodies of Popularity caught my attention.  I actually saw them open for Anberlin during the Cities tour in the spring of 2007, and while the absence of a keyboardist at the time was hard to miss (an instrument very prevalent on Popularity), their performance was enough to incite me to pick up their debut effort, and I was quite pleasantly surprised by the result.  While lyrically there’s admittedly not much on the spiritual front, it’s all positive material that can differ greatly from Jonezetta’s secular contemporaries.  It’s good, clean dance rock at its core, and sometimes it is just what I need to get me motivated.  If you’re willing to try something completely different in the indie rock market, Popularity is a rewarding listen.
~ Roger Gelwicks

Our synopsis: “Often overlooked, Jonezetta’s debut is a great example of indie rock done right while being radically different at the same time.” (Recommended by JFH’s Roger Gelwicks)
Perfect For: Fun listening, motivation
Song Highlights: “Get Ready (Hot Machete)”, “Communicate”, “The Love That Carries Me”, “Imagination”

So, what are your thoughts on and experiences with the album Popularity? Do you recommend it? If so, why?