ME IN MOTION “NOTHING AND EVERYTHING” TOUR BLOG 14:
Foxes Have Holes

I’m sitting in the Hallway of the Days Inn in Las Vegas, New Mexico.  This is the only place my computer can pick up wifi.  Tomorrow’s show in Dodge City was cancelled as of an hour ago due to crazy snow and terrible roads.  The guy at the front desk asked me, “So where are you guys from?”  This is a question we get a lot on the road.  Every time someone asks, my brain sort of hesitates and I don’t know what to say.   The three of us in the band moved to Nashville last summer, but we’re not ‘from’ Nashville. (Is anybody? ) I’ve always said- “Wherever you learned to ride a bike- that’s where you’re from.”  I grew up in Kansas,  Seth in Ohio and Tim in California. That’s where we’re from.  We’ve all lived in several different places throughout our lives and sometimes I have to really think before I answer that question.   It’s pretty crazy to think that we all somehow crossed paths, ended up playing together, and now live in the same city.  I know where I’m from, and it will always be home, but with all this traveling, I can’t help but feel like a wanderer.

I’ve been reading a lot in the book of Matthew lately,  and this question of origin brought a verse to mind.  In Chapter 8, a teacher of the law says to Jesus,  “Teacher,  I will follow you wherever you go.”  Jesus replies, “Foxes have holes and birds of the air have nests,  but the son of man has no place to lay his head.”  When Jesus started his ministry,  he was sort of a wanderer too.  He traveled from town to town healing the sick, teaching and even raising the dead.  Jesus had a hometown.  He grew up with family and friends just like you and me.  He knew that his time on earth was limited however, and that the real kingdom was at hand.  He spent the last 3 years of his life on the move passionately telling people about an eternal place and an everlasting life.  I’m comforted when I feel homesick because I know that God can relate to that feeling.  He knows what it is like to have no home, but he also has a hope to hold onto.  There will be room in a big house for each of us who come to follow him.   A place where there will be no pain, tears, or that feeling of homesickness.

J.R.R. Tolkien said “Not all those who wander are lost”.   A friend of mine said he was planning on getting that quote tatooed on his body.  It’s a great reminder of our true home.   I have a tattoo.  It’s a map of the United States on my right arm.  I’ve filled in the states where I have lived.  So far I have 5 states filled in, but I still need to have Tennessee colored in.  Maybe you don’t feel like me.   Maybe you don’t feel like a wanderer.  Maybe you feel stagnant where you are.  Whatever the case,  remember that Jesus was on the move for a purpose.  My question to you, fellow wanderer…and to those staying put:  Do you have a purpose?  Do you have a reason for what you’re pursuing?  You don’t have to be lost.  You don’t have to feel alone.  There is a kingdom that is coming.  There is a place that will be our true home. 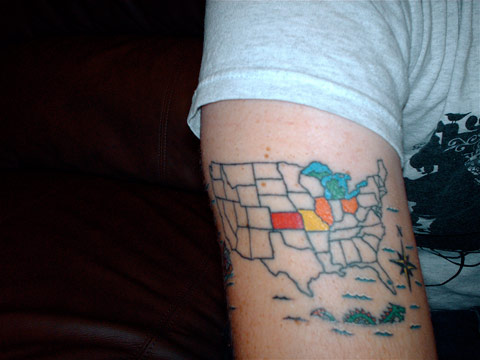 “Circle My Dreams” by Acoustic Truth