It’s currently 6:10 AM. Back in the van for an early morning drive from Bakersfield to Sacramento where we are meeting up with some of the awesome people from Air 1 Radio. The past couple shows have been no exception to a great tour so far.

A few days ago, we were in Las Vegas, and one of our sway bars that help connect the trailer to our van and help stabilize it just snapped while we were driving down the road, and proceeded to make a rather loud scraping sound as I’m sure the metal bar was sparking along the asphalt. It sounded a lot worse than it probably was, but needless to say, we were stuck with a predicament.

We took the bars off for the time being, and since they help the back of our van not sag so much, it was riding pretty low after that. The next morning, we woke up with a mission to go find the piece that we needed which had snapped off, which was a simple U-Bolt. Should be an easy task to find such a small, straightforward piece. So we started at the obvious, Wal-Mart. No luck there. We walked over to LOWE’S. Certainly they would have them, we thought. But once again, after searching the whole store for about 45 minutes, we were out of luck. So we drove around for a while and found a Home Depot. Maybe they would have something that LOWE’S didn’t. But no, once again, we were proved wrong. Ok, so we were starting to get a bit frustrated as our quest from this mythical U-Bolt took us to the next place, which usually has the answer to everything – Harbor Freight Tools. This place is a handyman’s dream, so we were sure our search would end there.

A half hour later, we walked out of the door with our heads held not-so-high, as they had nothing remotely close to what we were looking for. We even talked to a guy in the Marines inside, and he tried to help us out, but to no avail.

So, it was really time we got our heads together and figured out what in the world we were supposed to do. We came to the conclusion that we needed to get to a Trailer Dealership/Repair Shop. So we got on the phones, and called what seemed like every place in Nevada, and none were open, as it was Saturday and we were quickly losing daylight.

The last stop of the day, was quite an overwhelming one, Bass Pro Shop. For those of you who aren’t familiar with it, this place is the IKEA of fishing. They have fish radars, fishing boats, fishing attire, and $1000 fishing poles that will catch and even fry the fish for you (well, maybe not the last part).

So, we thought since they have trailers for the boats there, we’d finally be in luck. But once again, as it was probably 7 pm by this time, we walked out of that place empty-handed.

I thought to myself, how could just this one bolt be such a thorn in our sides? It’s such a small piece, but it keeps the whole assembly together. Sometimes I think the same can be said of our lives and our faith. If we have one part of our life that is out of whack, or “broken”, then the whole wheel doesn’t turn right. I think as humans, we have the tendency to want to have control. We want to turn our lives over to God and entrust them into our Maker’s hands, but we want to retain a small part of “our” lives. Whether it’s a small corner of our lives that we don’t want to let God run, a secret sin that we keep running back to, or a relationship that we know isn’t where it should be, anything like this can throw our whole being into a mess.

Yesterday, we finally found what we were looking for, as we made it to a small trailer shop in Paso Robles, CA. We left that place with a totally complete trailer system, as they had exactly the part that we needed. What a good feeling that was to have working sway bars again…

Today, maybe you’re feeling a little bit like this situation, having one small part of your life ruining the rest. I just want to encourage you to take the time right now to turn back to Jesus, who knows you better than anybody else ever will, and entrust your whole life back into His hands. Let him fix what needs fixed, and be exactly what you need. 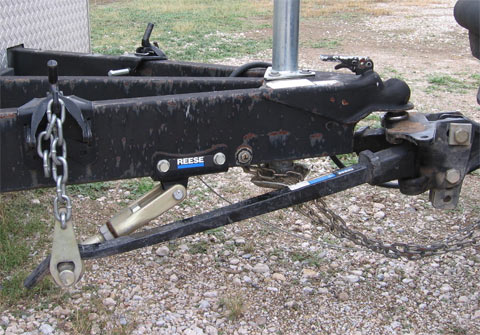 “The Victor” by Jasmine Higgins of Life UNLTD

“How people can think that there isn’t a God?” by MIKESCHAIR’s Mike Grayson