O-H! I-O! Yes, it’s good to be back in the winter wonder land known as Ohio for a few days! I come to you tonight from Macedonia, Ohio, just south of Cleveland. What a day. First of all, the Browns were once again victorious again. Secondly, the show tonight was a complete blast, as you see in the picture above. Today is also extra awesome because we’re staying at the home of a three time Super Bowl champion in former NFL player Je’ Rod Cherry, an awesome man of God with an equally awesome family. It’s pretty cool for the obvious reason that he’s played in three Super Bowls, but also, I have his rookie card. Yes, I am that nerd, and I let him know it haha. It’s awesome to see him doing God’s work since his time in the NFL has ended, speaking to many teens and young adults and serving as a strong example, as well as donating the first Super Bowl ring he ever won in an auction for charity to help fight hunger. What a blessing to meet him!

On a personal note, this has been one of my favorite tours that I’ve ever been a part of. I got to say that everyone who’s been coming to the shows have been crazier and crazier each night, as has Eleventyseven. I don’t think you’ll ever find a nuttier group of guys, but man are they fun. I’ve said this before, and I’ll say it again, but their new music is so good. Whenever it becomes available, you’ll need to get it. Their music is just fun, and you can’t help but smile whenever you hear Matt Langston’s voice singing about cyborg robot squirrels. 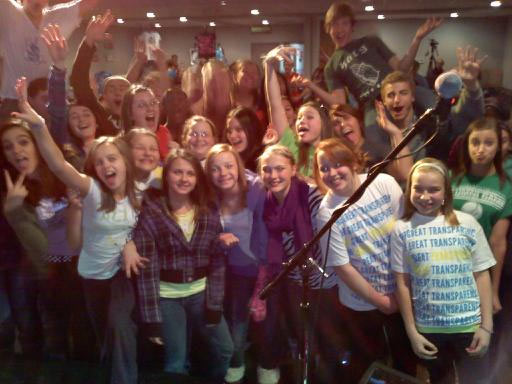 “Rebuild Your Love Tour Days 11 – 14” by The Great Transparency

“The Kingdom of Heaven” by Kinsey Gensel