So, I’m well into the swing of baby daddy duty (AKA I’m Mr. Mom now). Thankfully, Will’s grandma (also known as my wonderful and gracious mother) has been helping me out with Will on the days Amy is back at the hospital as an operating room nurse.

Amy’s still breast feeding the little dude (well, he’s not even fourth months old yet), so my Mom and I give him a bottle at least twice during the day while Amy is at work. But usually, we have to be strategic in how we time the second bottle so that Amy can feed him as soon as she gets home from work. Will is three and a half months old now, so distracting him is getting a lot easier. It’s almost becoming an art form on how to effectively distract the little guy. 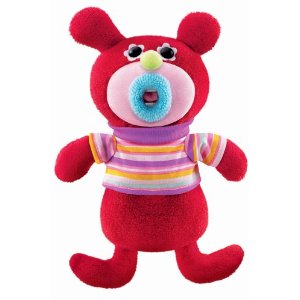 Yesterday, Mom went downstairs to call in an order for takeout dinner while we waited for Amy to arrive home on an especially snowy and icy evening. She left me alone with Will who was swinging in his handy dandy baby swing while I was working in my office. Suddenly, and expectantly, he began to lose it, whining and crying. It was time for him to eat again, but we knew Amy would be home any moment and would want to feed him… for both of their sakes. He was just about entirely inconsolable. I tried a rattle which totally distracted him (if not completely startled him!) as well as one of his new favorite toys, a Sing-A-Ma-Jig. Now, these Sing-A-Ma-Jigs are absolutely freaky looking and they make borderline irritating noises. But while most noise-making baby toys are REALLY redundant and monotonous, the Sing-A-Ma-Jigs puts the noise-making control into the palm of the parents’ hands. For example, there are three modes on this little guy — two are nonsensical noises while the third is “Oh Where Has My Little Dog Gone” (the chorus and a verse). You squeeze a big button that is hidden under its fur on its tummy for it to sound out each word, and you can control how long they sing the word or how short. As it sings or makes sounds, the little creature’s mouth opens, revealing 2 teeth. It’s pretty fun to change the way it sings or presents sounds, but it’s truly a freaky little thing. (Note: He’s too young to play with it himself, but those little teeth in its mouth are pretty hard, and I can imagine that a child could hurt themselves if they close their finger in the Sing-A-Ma-Jig’s mouth) 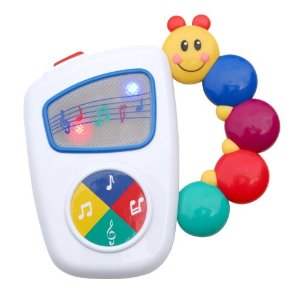 This worked for awhile, until Will decided it just wasn’t going to cut it. I was about to totally give up and leave him to a crying fit until Amy got home in a few minutes, but as I turned away, I grabbed a song-playing Baby Einstein toy that blinks dance-party-like colors while playing classical tunes and stuck it right in his face. He immediately stopped crying and stared, entranced by the lights. SCORE! So I just kept the music playing and the lights blinking until Amy arrived home. When she walked in, she found me playing games on my iPod Touch while listening to Audio Adrenaline with earbuds in, as Will stared at this music box right in front of his face. Success.

[Now, today I got my new safety ear protection “earmuffs” (or as I like to call “Babymuffs”) in the mail. Since his SCREAMS literally cause my ears physical pain (which just irritates me), I’ve decided ear protection is the way to go to keep me from becoming entirely useless. I’ll let you know how that test goes… 😉 ]

“We Are The Branches. He Is Divine.” by John DiBiase