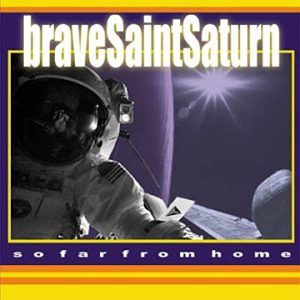 Part one of the trilogy about the USS Gloria, So Far From Home was the first album from astro-rock, Five Iron Frenzy side project, brave Saint Saturn.  More emotional than most Five Iron Frenzy songs, So Far From Home explored love (“Moon Burns Bright”), losing a loved one (“Two-Twenty-Nine”), as well as the personality and life of Jesus (“Under Bridges” and a cover of Michael W. Smith’s “Rocketown”).  The story of the USS Gloria didn’t seem to begin until bS2’s second album, but they successfully utilized the concept of the loneliness of outer space as a metaphor for how lonely life can be.  And the band made some great electronic-rooted acoustic pop rock to go with it.
– Scott Fryberger

So, what are your thoughts on and experiences with the album so far from home? Do you recommend it? If so, why?

“‘Spend Time With Me'” by John DiBiase

“A Mighty and Loving Shepherd” by J.M. Farro