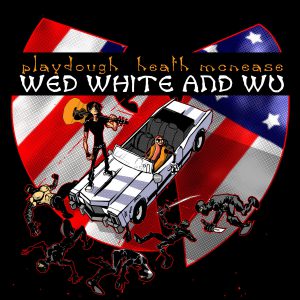 Independent rapper Heath McNease recently released a magnificent new album called Thrift Store Jesus.  But just a few months prior to that, he dropped a full-length mixtape with hip hop buddy Playdough.  Wed, White & Wu was seventeen tracks of Heath, Playdough and some guests rapping over some classic Wu Tang Clan beats.  The beats are raw and untouched as far as production, and the guys went all out with the lyrics.  They flexed their skills and brought along some fire-filled guests such as Guilty Simpson, RedCloud, The Bodega Brovas; all of whom ripped it up.  As Playdough said in a recent interview, “we’re rapping our butts off on it.”  Yes, they were.  It’s not often that an album/mixtape comes out that I still listen to on a regular basis even a few months later.  But this one hasn’t gotten old yet.  This is available as a free download on a joint Bandcamp the two created.  Whether you’re big fans of these dudes or you’ve not so much as heard their names, if you like genuine hip hop with high quality, lots of style and some humor, check out Wed, White & Wu.
– Scott Fryberger

Our synopsis: “An excellent mixtape that does the Wu justice while still maintaining the Heath & Playdough personalities.” (Recommended by JFH’s Scott Fryberger)
Perfect For: Fun, great raps, Wu Tang fans
Song Highlights: “#CougarSwag,” “You Know My Steez,” “Survival of the Fiddest,” “The Ego Has Landed,” “Gravel Spit”

So, what are your thoughts on and experiences with the album Wed, White & Wu? Do you recommend it? If so, why?

“Encouragement from Beside the Dentist Chair” by John DiBiase