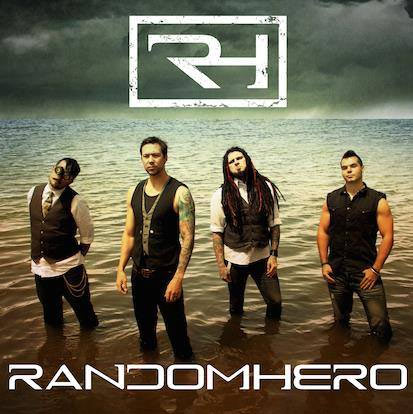 Aaron Watkins grew up despising what he ended up loving – music. Wyoming born and Colorado raised, Aaron has seen and survived a lot of things. His father was an alcoholic who played in some fairly well known bands, and he did not want that lifestyle for himself. He toured with some bands right out of high school and escaped the music scene in his mid-twenties when he finished up his bachelor’s degree. He then said, “God, I’ll do whatever you want me to do.” God wanted Aaron to do what he hated in his childhood – perform music. Random Hero was formed by guitarist Joshua Bertrand the year prior. Aaron’s manager told Aaron about the audition they were holding for a singer. Aaron auditioned and was awarded the slot, forming the nucleus of Random Hero. God changed his heart and gave Aaron the desire to be in music and the desire to tour.

God also gave Random Hero the revolving door of drummers. Aaron quipped that “We fight to do this because this is what God’s called us to be. The timeline has been crazy, so you know when God is leading someone in or out. He takes people in and out until we have the right mix.” Four drummers in eight years is definitely an uphill battle. For a while, the services of Air Force serviceman Josh Tarrant were utilized. It got to a point where it was impossible to balance the two and he left. Then the band found Patrick Madsen in 2014, and Aaron raved about him. “He has the greatest heart and is a phenomenal drummer. I always wanted to be a drummer so it is so much fun to watch him play.” Ironically, drums are the one instrument Aaron can’t play. His toddler son (Huxley) can play the drums, which you can watch on his Instagram @aaronthewatkins.

I also asked Aaron what goes into the recording process, what is ‘mastering’ and ‘mixing’. His combined thoughts: “You are always constantly writing, and it may or may not see the light of day. We have written hundreds of songs. You set a date to record and twelve to fifteen songs make the chopping block. The songs need to be the best representation of who you are, and they need to be the best songs. The producer will likely make you rewrite half of the songs, which is painstaking and time consuming. Everything from vocals to guitars to drums to the special instrument is recorded separately so each thing can be edited. If one part needs to be reworked, the whole band doesn’t have to play the part fifty times. Mixing is what your songs sound like and are built.” How loud are the vocals compared to the guitar, bass, drums, and so on? “Mastering is when you take the volume up several notches so it sounds ‘beastlier’. The worst part of making a record is waiting for it to be finished. You are always learning and evolving like we did from Carry Me, Bury Me to Oceans of Change and we will in the future.”

Making an album is not an easy endeavor, and being in a band involves great dedication. When a band ‘trains’ a new musician, it isn’t just “teach them the hits and go on the road.” The prospect has to have the drive and the will necessary to be in the band and to learn the songs. They have to be willing to come to practice and to receive constructive criticism. They have to learn every song in the repertoire to be ready at any point. It isn’t a mechanical ‘this is the exact way you play it’ with no deviations, but there are the main parts to every song you have to have down. There is room for improvisation and personalization occasionally. We started practicing two times a week, and to be a new band you have to practice a ton to be your best. Now we practice two times before leaving on tour because it is all muscle memory at this point. Speaking of touring, Random Hero is touring with good friends Spoken this June.

Random Hero was (and is) under the tutelage of former longtime Skillet guitarist Ben Kasica. Ben taught the band how to be marketable, and to blend Aaron’s pop influences with Josh’s progressive metal influences. Random Hero strives to be themselves while maintaining the marketability, and they don’t want to restrict themselves to the metal market. Everybody in the band needs to like the songs and to have input in the process, but you won’t find Random Hero writing a six minute song. Aaron finds that after three minutes people zone out and are ready to go to the next idea, so they strive to create an album with twelve radio hits.

Keeping this in mind, Random Hero changes the set list nightly. The radio songs are always on the list, and fan favorites are usually on the list. The set list is dynamic, yet some songs may be played rarely or occasionally. A typical show lasts thirty to forty five minutes; with material from the Breakdown EP, Carry Me Bury Me, and Oceans of Change. Random Hero doesn’t hang out away from fans in a mysterious green room after their set. They often stay until the doors close while taking pictures, signing autographs, and hanging out. The band used to wear makeup and face paint on stage, but as they have matured they saw it as more of a nuisance and slowly stopped to have a more mature look.

Some bands rarely produce EP’s, but Random Hero embraces the EP. “An EP is an exciting taste of what is to come. For us, Breakdown set the tone for how we write as a cohesive unit. An EP is a good feeler to determine if the fans like a new evolution or not, and what to change for an LP.” Random Hero left Red Cord Records and signed with Pando Records/Warner/ADA. The band will be back in the studio soon and will come out with a new EP later this year. Aaron Watkins also will be releasing a solo album on August 11th.

Despite the business aspect of music and the unusual lifestyle, Random Hero’s mission is to glorify God. These “musicianaries” strive to please God in every area (not just certain areas). God is the boss and Random Hero aims to be willing servants.

“Alone but Together” by Hanna Kim

“Picking Your Path” by Jonny Diaz

“My Lesson” by Erin Causa