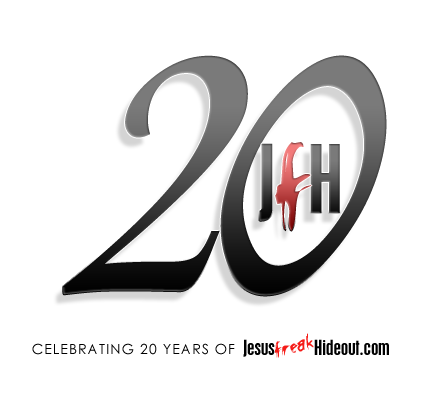 Twenty years. It’s kind of amazing to even think about doing ANYthing for two decades. I’m hesitant to say “any job,” because Jesus Freak Hideout was born out of a passion for something and was never meant to be a job – even if that’s what it did become for some time.

I had always grown up with a knowledge of Jesus and what He meant to us, but I didn’t really invite him into my life as my Lord and Savior until the early 1990s. And then, my mom’s love for the classic rock act Foreigner and a list of “If you like this artist, then try this Christian artist” in a magazine called “YOU” lead us to a Christian bookstore where we could listen to demos of Christian music and pick out music we were interested in.

It all started with a band called Idle Cure. They were popular in the early 90s for being a Foreigner sound-a-like with an overtly Christian message (and it’s a slightly guilty pleasure to revisit those albums from time to time 😉 ). After we exhausted the Idle Cure discography, return trips to the bookstore cultivated a love and appreciation for Christian music we’d discover – not on the radio, mind you – but via demos and magazine articles and advertisements (and endcap displays at the store). I also loved a Christian music video show called “Signal Exchange” (which was hosted by the super talented Cory Edwards, who went on to direct an animated film called Hoodwinked years later). It was through that show that I’d see music videos by artists like Audio Adrenaline, Dakoda Motor Co and Switchfoot and would soon fall in love with each of those – and many more.

I’ll save you ever minute detail in my personal history of being introduced to Christian music, but the fact is, these artists – and a burgeoning love for Jesus – sparked a passion that still remains today (although it’s certainly changed).

Which was the first CCM artist you ever heard (that introduced you to Christian music)?

We Recommend: All Sons and Daughters, “Brokenness Aside EP”

“A God Who Goes to Great Lengths” by J.M. Farro

25 Years Later: Newsboys, “Take Me To Your Leader”