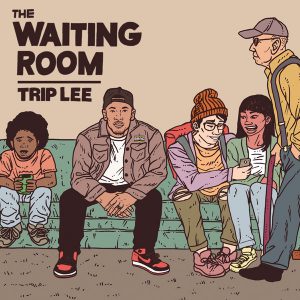 Check out this behind-the-song look at Trip Lee’s new mixtape, The Waiting Room, written by Trip himself!

This song is about the roller coaster process that comes with big dreams. You might wake up in the morning feeling like a million dollars, only to have your dreams dashed as the day goes on. Chasing dreams is always a tough road, but it’s worth it— because when you’re headed in the right direction it feels like you’re “way up in the clouds.”

This song is an anthem for those who stand firm and can’t be moved. Those around us may push us to conform and be like everyone else, but “we ain’t gon let the world mold us.” Even when they turn up the heat on us, we’re frozen in place & moving forward.

This one calls attention to all the brokenness in our world, and calls out for God’s mercy. I start out talking about me in the first verse, the second verse hits on our hatred for one another, including racism in America. And the final verse points towards our hope for Heaven. All throughout the repeating cry is “Lord have mercy!”

This song is a soundtrack for those times when everything seems to be going wrong, and God doesn’t seem to be listening to our prayers. I’m basically playing an exaggerated version of myself, emphasizing the pain and abandonment we often feel. The intro and outro quote Psalm 13, where David asks a similar question, “How long, O Lord, will you forget me? Forever?”

This song is two letters in one— a grieving letter addressed to my dad, and a defiant letter addressed to death. In the verses I reflect on my dad’s life and death, and how tragic it is that he died early. But in the hooks, I speak directly to death, saying that I’m ready whenever it comes. Verse 3 is the culmination of the song, where we’re reminded that death has died, and no longer has real power over us.

This song is an anthem for the unashamed. Some have questioned whether or not Romans 1:16 still characterizes what we do. This song is a reminder that our anthem hasn’t changed, and we’re still as unashamed as we’ve ever been.

In this song, I do a bit of role playing. I speak from the perspective of a typical rapper who hopes to make it big and get rich so all his problems will go away. Throughout the song the character makes more money, but doesn’t get rid of all of his problem. It’s meant to challenge the false narrative that more money is the solution all of life’s woes.

This is another song full of lament. It’s meant to express the grief that comes with prolonged suffering, and I cry out to the Lord, “How long will it be till you take it away?” The hooks are the response to my cries. The listener can take them as words from a friend, or from God himself. It’s a reminder that the problems we face, don’t have to last for eternity. Healing is on the way.

This song is the climax of the whole mixtape. The songs have been filled with lament and grief, with hope sprinkled throughout. This final song points to the ultimate hope that answers all the questions I raised. Though our life’s journey is hard, our future is bright. We can endure the pain in this world because we have hope for a brand new one. Why dwell on the past, when we have forever in our future?​

Gawvi – “We Belong” Track by Track

“Thankful in Every Circumstance” by Charles F. Stanley

“God Is With Us In The Mystery” by Ian Yates