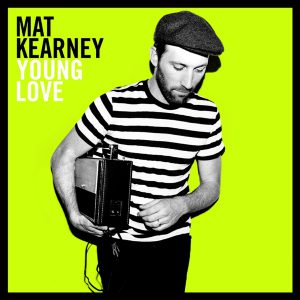 It’s been some time since we last had a “10 Years Later” retrospective, I’ll admit. But with 2011 being the target for these now, it’s crazy to look back and see all that released that year was a decade ago now.

Recently, Mat Kearney announced a brand new studio album slated to release this spring, titled January Flower, so it seems only fitting to take a look at his 2011 album, Young Love. Although Bullet was the album that had introduced me to this eclectic singer/songwriter, I think Young Love has been the album that has not only endured the longest but has held the most meaningful songs for me as a listener of his.

In my own life, 2011 was almost one year into parenthood and 8 years into marriage. Any new parent can attest to the strain and tension that can be brought on a marriage with a newborn in the mix. (Add in the wife’s struggle with narcolepsy, me as a stay-at-home dad, and her as a working mom in healthcare and you can bet there were some tough days and nights.) “Ships in the Night” might be Kearney’s biggest hit from this album, and for me, it’s my favorite song in the artist’s wide repertoire of original music. It’s so catchy that you can almost miss the seriousness of the song. Lyrics like “you’re out the door, I’m on the couch” is something any long-term (and honest) couple can relate to (even if it’s more in the “missing each other in the night” kind of way than a “you’re in the doghouse” way).

But there’s definitely more to Young Love than just this hit single. “Hey Mama” is a fun, flirty and bouncy album intro, “Count on Me” is a cute but catchy love anthem, while “Sooner or Later” – with is solid beat and soaring chorus – is probably second in line behind “Ships in the Night” for album favorite (Actually, can we just please acknowledge how great the drums sound throughout this album??).  “Chasing the Light” fits right in as well, mixing Kearney’s first-hand stories with an encouraging message. And finally, “She Got the Honey” and “Young Dumb and in Love” are another pair of fun pop love songs to round out the track list. “Rochester” still remains the ugly duckling of sorts, a much more serious and stripped down song about Kearney’s father and rough home life. I understand Kearney wanting to write a song like that, but it ends up being out of place on the album, and a downer way to end what is otherwise a great pop album.

While we sit and wait for the release of January Flower on May 21st, Young Love is still an enjoyable and fresh album to return to again and again.

“Do We Enjoy Music?” by Roger Gelwicks