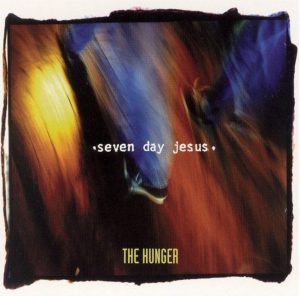 JesusFreakHideout.com continues celebrating its 25th anniversary by looking back on the best and most important Christian music released in 1996. Today, we look back on one of the earliest releases from 5 Minute Walk Records and one of the most beloved independent Christian alternative albums from the era: The Hunger by Seven Day Jesus. A very sincere thanks to SDJ frontman Brian McSweeney who took plenty of time answering my questions about the band’s history and the album, and even did some great research to help me find the album’s exact release date (April 26, 1996).

The History: Seven Day Jesus was formed in Huntington, West Virginia in 1994 by McSweeney, guitarist Chris Beaty, bassist Wes Simpkins, and drummer Matt Sumpter. The band wasted no time in making music, producing three EPs within their first year and selling them on cassettes. As it became clear that they were gaining positive momentum, the perfectionistic Brian describes himself as being “out of control,” going so far in those early sessions as to insist on tuning all the guitars by ear “like a tyrant—the engineer must’ve thought I was a complete idiot.” Those recordings may be lost to time, but Brian describes the sound of them as “quite different at times from what ended up being The Hunger—we were trying on styles like clothes.”

During this time, Beaty hosted a Sunday radio show at the local university, a gig which brought him in contact with label representatives regularly. One of those labels was a startup California-based Christian alternative label called 5 Minute Walk Records; Beaty was able to get the band’s demo into the hands of label founder Frank Tate, who invited the band to play at the label’s tent at Cornerstone 1995. Having passed that audition, Seven Day Jesus became one of the label’s earliest signings. 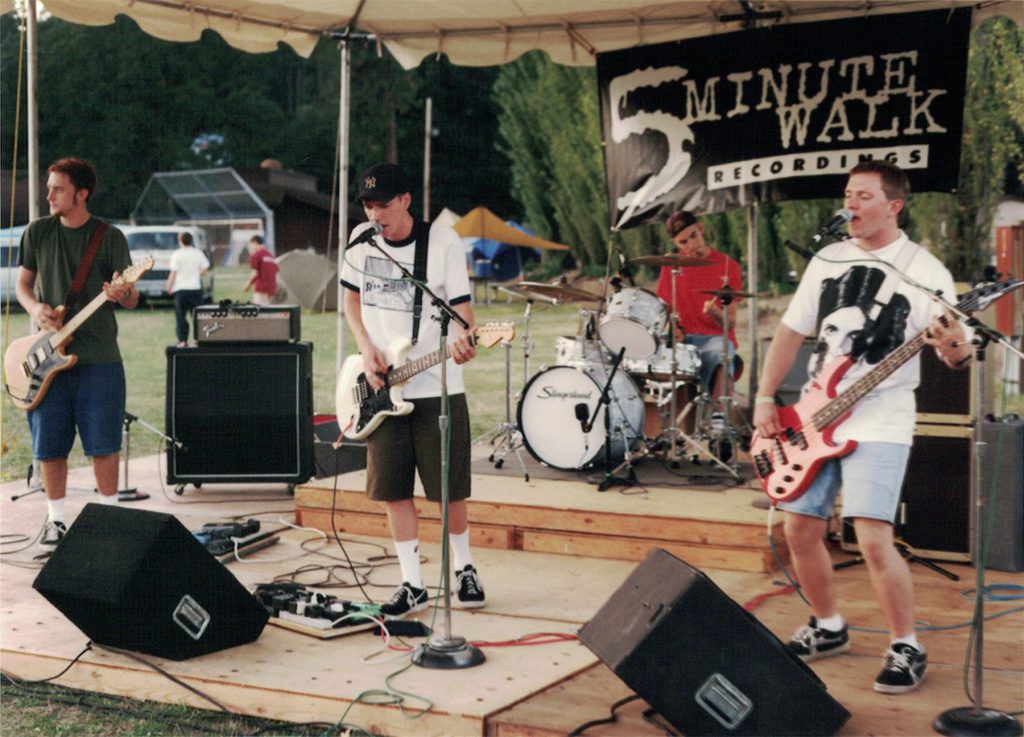 Life was fairly simple for the band circa 1995-96; Brian was taking college classes and working at McDonald’s while writing The Hunger. When asked to describe his musical influences at this time, Brian names quite the diverse trio: West Virginia hard rock band CHUM, northwest power pop band The Posies, and contemporary Christian singer Michael English. Lyrically, Brian took his cues from the Christian faith that he grew up in, his father being a Nazarene preacher. The liner notes for The Hunger include Biblical references for each song and the focus is clearly consistent with the ministry approach prioritized by the label—though Brian notes as he looks back on them that his lyrics in this era “are about healing, disillusionment, shame, forgiveness, anger, and perspective. More life themes than religious dogma.”

The Album: The band traveled to their label’s base in Concord, California to record The Hunger with future Five Iron Frenzy producer Masaki and Plankeye bassist Luis Garcia. As Brian describes it, they “reined in our stylistic chaos and constructed the sonic frame and color of the album…I learned a lot about production, tone, and the parts coming together to make the whole from that experience. And Masaki and Luis learned a lot about the depths of my perfectionistic neurosis!”

The tone is set immediately with the clean and dry barre chord intro of “A Time to Heal” that, one snare hit later, shifts into a driving power chord grunge that sounds so perfectly at home in the mid-1990s, before swinging into a sing-able chorus that is downright upbeat, the type that navel-gazing mainstream grunge was rarely able to duplicate. “Flybye” and “Pavement” are similar examples of the intersection of heavier grunge tones with singalong choruses, while SDJ explores the quieter ballad sound with the clean and deeply sincere “Forgive Me” and the title track. None of these songs succeed as they do without Brian’s tender voice; even with his noted perfectionist tendencies, vocally he never attempts to do too much, never letting his clear talent overwhelm the sincerity of the lyrics and songwriting.

Lyrically, The Hunger is a fairly straightforward album, mostly choosing the simplicity of the themes of Christian living rather than clever poetry or deep analogies. “The day is gray outside / It’s still brighter than the day would be if I was without You” or “Open up the sky / let Your love appear / Let me see Your eyes / Lord, I need You” are examples of the type of lyrical minimalism present throughout, and that’s perfectly fine. None of these songs were recorded with radio as the primary goal; they are generally content to breathe at a moderate tempo, never rushed and never over-relying on cute guitar hooks, even though “Strength” and “Delightful You” have a clear power pop influence and a natural catchiness. It’s moments like the quiet extended bridge of “Flybye” or the lengthy acoustic guitar intro of “Ashamed” that show the band’s confidence in their music. 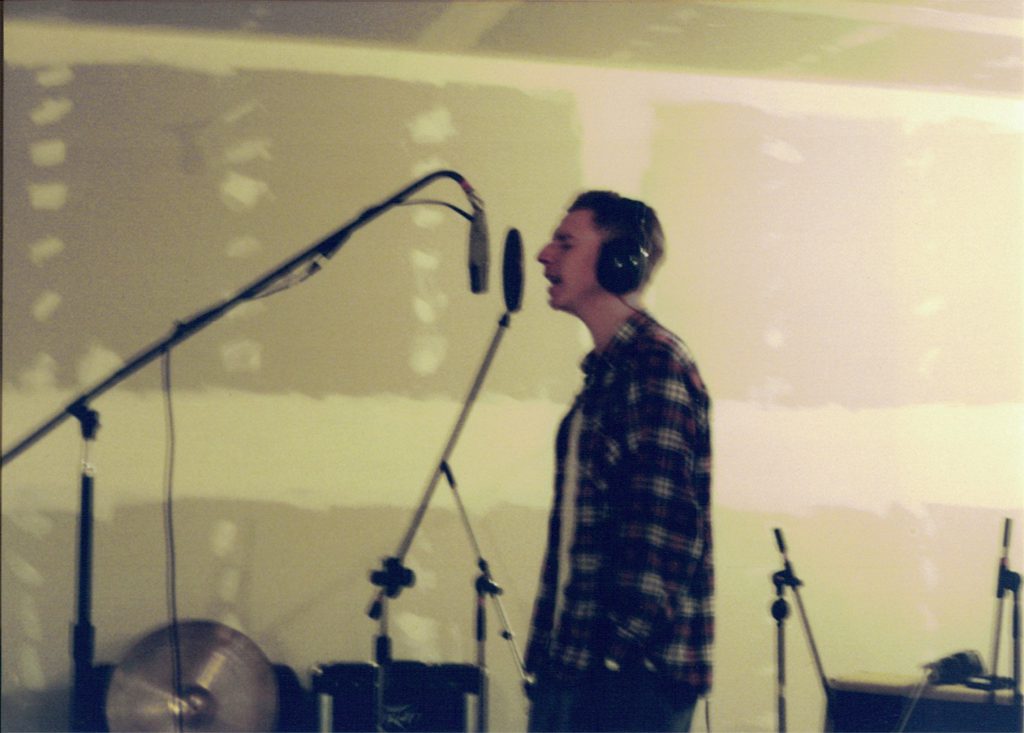 The album’s highlight (and biggest gut-punch moment) comes right in the middle with the fifth track “Forgive You,” where the slightly cheesier lyrical musings found elsewhere give way to a screaming intro guitar riff and Brian’s tortured reflection as written in the liner notes: “It was extremely hard to deal with the truth that I had to forgive the person who raped my close friend. Even absurd.” It’s a shockingly mature message, uncomfortable but eternally true. As he screams “You rape my soul!” over the growling power chords, and then effortlessly transitions to a broken sincerity reflecting on Christ’s sacrifice to forgive us for our sins: “Sometimes I think about His mind / How His heart could love a man like me, and one like you / Could I even be so kind? / Forsaking everything I long to do,” the guitars transition just as effortlessly to a quietly unsettling tremolo, before building back to the raging chorus. It was, and is, an absolutely brilliant and emotionally devastating song, and it carries the same weight (and the same truth) 25 years later.

This all made so much more sense to me when Brian shared the diversity of his influences; it’s hard to think of an album from this era that so effortlessly blended the heaviness of power-chord grunge with upbeat pop and such strong vocal sincerity. Plankeye’s Commonwealth may be the closest comparison, though I feel this is a superior album, certainly vocally. The entire album is also remarkable for its excellently clear mix, in an era where too much alternative music was content to just be noisy. Unfortunately, as with most other earlier 5 Minute Walk recordings, The Hunger is not available through iTunes or streaming services, but can at least still be heard through bootleg YouTube videos (Brian’s response to this: “Bootlegs forever!”).

The Legacy: Brian describes this era of the band as “a lot of fun—life felt exciting and generally uncomplicated. I was traveling with my best friends in a conversion van, seeing the country for the first time, playing live music, making new friends.” SDJ toured behind The Hunger with Plankeye and Fold Zandura, and a longer tour with All Star United and an early version of Third Day. Nowhere is Brian’s description of his “uncomplicated” mindset more evident then when he gleefully described to me his favorite tour prank: a remarkably loud Screaming Meanie trucker alarm set up to provide a 3:00am surprise to Plankeye in their hotel room.

Nothing can stay uncomplicated forever, and the complications arrived quickly as the undeniable talent of McSweeney and bandmates wasn’t destined to be independent for long; heavyweight Christian label ForeFront Records came calling and signed the band in the summer of 1997 (a summer that Brian spent touring as Audio Adrenaline’s guitar player following the departure of Barry Blair). The resulting self-titled release in January 1998 came loaded with large doses of pop-rock that were a hit in youth groups of the time (I can say so from personal experie 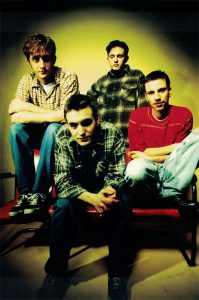 nce). For many, it was the debut release of a new, fun and cool Christian rock band, an album full of catchy earworms. For those who knew The Hunger and considered it one of the best releases of its time, it was a more difficult album to digest, a band that seemed to cherish sincerity in their sound suddenly dressed up in the structured gloss of contemporary Christian radio rock, in what always felt like a label-driven style shift. There’s no denying “Butterfly” is a fun song—but it feels less so from the band that wrote “Forgive You.” Seven Day Jesus toured admirably to support the self-titled album, but Brian gave interviews admitting that he “went a little too far” with the poppier direction and before 1998 ended, the band went on a hiatus that ended up being permanent, reuniting only once for Bleach’s final show in 2004.

McSweeney never really engaged further with the Christian music market after this time period, relocating to Chicago and, joined by Sumpter, forming the short-lived rock band Matthew (whose sole label release, 2002’s Everybody Down, deserved much more positive notice than it was given). Since then, he has laid fairly low, with some solo independent releases (and, if you missed it, a vocal credit on Relient K’s 2009 song “Therapy”) and most recently, a new Chicago alternative band called MIIRRORS that is definitely worth checking out (I highly recommend their moody “Nightwalk” as an entry point) with a new album releasing later this year.

Oh yeah, and did I mention he spent 2014 and 2015 as a backline drum tech for an artist you may have heard of by the name of Prince? It was “one of the most surreal experiences” of his life, one that took Brian to Paisley Park, Saturday Night Live, London, and Dubai—quite a journey for a preacher’s kid from West Virginia who, through the uncomplicated lens of a college-aged Christian, sincerely poured out his faith and his heart into The Hunger, a brilliant and timeless Christian alternative rock album that sincerely deserves to be revisited. 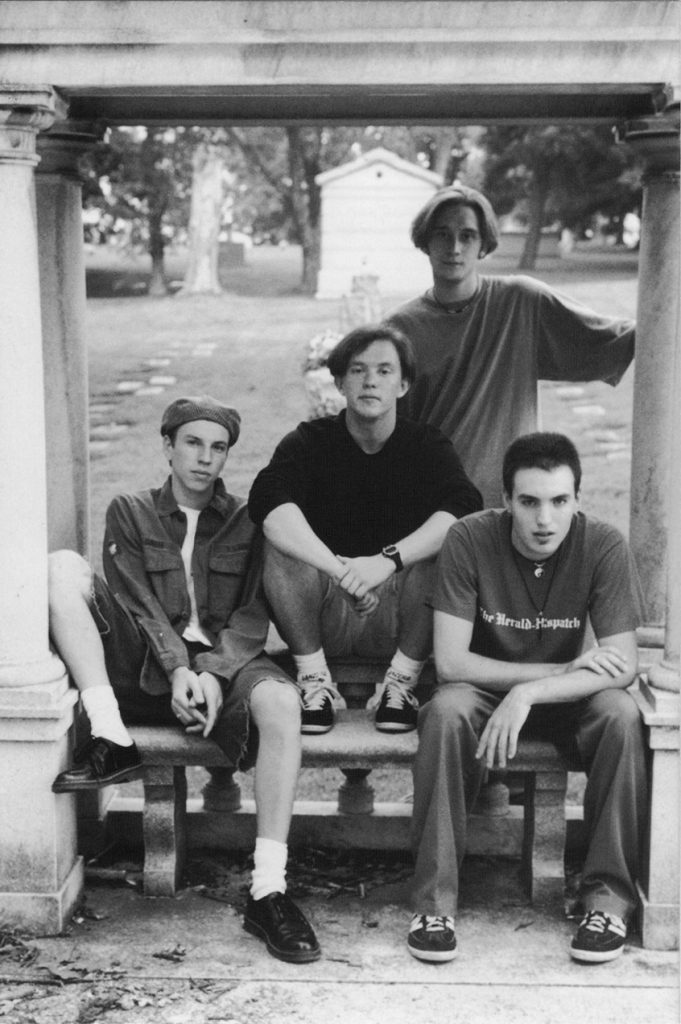 “God is Prepared to Do the Impossible” by J.M. Farro

“Why I don’t listen to my radio” by Adam Dawson