My wife and I have 2 cars.   We are very fortunate.  One of these was a gift.  Free.  We talk a lot about how incredible it is that we have 2 working vehicles.  Most people on this planet would be extatic to have one, and we have two.  I have a silver pickup truck that we named “Cecil” and my wife has a 4 door green sedan called “Louie.”  They are both mazdas and they were both made in the same year: 1991.  Yikes. That is old.  19 years to be exact.  They are both just shy of 200,000 miles. They are also both running great.  It’s incredible.  However, they both have their share of battle scars.  My truck has slammed into the guard rail twice due to icy conditions and poor Luoie has duct tape for a window.  (The story behind that is another can of worms).  The paint is also oxidizing and fading badly.

Every now and then we have a small repair to do and yesterday something happened.   We drove Louie to church and after the service offered to take our friends Kellie and Caleb home.  We all hopped in and as I turned the key…nothing happened.  Dead.  As a door nail.  Not choking, not struggling or trying whatsoever to turn over.  Dead.  After attempting to get a jump from some very kind strangers we decided to give up.  We got a ride with our friend Tessa and decided to tackle the problem with a tow truck on Monday.

Later that evening my brain started to storm.  I thought maybe Louie’s battery needed an overnight charge and so I drove the pickup back out to the chuch parking lot to retrieve the battery.  Before removing the battery from the stranded car I thought to myself, “What the heck,  I’ll just try to start ol’ Louie. “  Sure enough, she fired up the first try with a loud Vrooooooooooom!  Well, since I drove to the church alone,  I obviously couldn’t bring Louie back with me.  I went straight home and picked up Jenna so we could get the car home.  When the 2 of us got there we noticed Louie had a low tire and spotted a nail.   We then headed straight to the gas station to fill it.  Jenna drove the truck behind me as we pulled in to the station to fill the tire.  I almost turned the car off but decided quiclky that I shouldn’t in case it wouldn’t start again.

The following morning I took Jenna to work and came back to drive Louie to the shop.  Vrooooooooooom! She started right up again!  The tire had lost air through the night so I pulled into the BP around the corner to give it one last breathe before heading to the shop.  Like an idiot,  I turned the car off.  Wouldn’t you know,  as I attempted to start her again she refused.  Great.  Back to the drawing board.  Unbelievable.  What was I thinking?!?!?!  I put Louie in neutral and began pushing her to the edge of the parking lot.  Just as I was about to call the tow truck and older man came up to me.  He was filling his old red truck at one of the pumps and said,  “What’s wrong with it?”

“turn your headlights on, “ he said as he walked towards me.

This guy looked kinda like Bubba from the movie Forrest Gump.  He was probably about 60 years old and wearing overalls.  His hair was graying and all of his front teeth were gold.  We talked back and forth about the symptoms and what we thought the diagnosis should be.  Turns out he was a retired mechanic and it seemed like he knew what he was talking about.  I popped the hood and he began poking around.  He said the batterry was fine because the headlights didn’t dim when I tried to turn the engine over.  After wiggling some wires and getting pretty greasy we agreed that it was most likely a bad starter.

He said we could just pop the clutch and I would be on my way.  He climbed back into his red truck and pulled up right behind me.  Our bumpers were touching.  I put the key in the ignition to gain contol of the wheel and he started pushing me with his truck out into the street.  About 20 yards down I let the clutch out and Vroooooooooom!  Louie started right up!  I pulled over and got out of the car.  He rolled his window down and I said my thanks.  I reached into my wallet and found a crisp five dollar bill.  I handed it to him and he said “Now go get that thing fixed!”

I thought back to our tour wiith Sanctus Real.  There was another band on the bill from Portland, OR called Above the Golden State.  They have a song called “The Golden Rule.”  The lyrics are a simple reminder of the greatest commandement.  “Love the Lord your God with all your heart, soul, strength and mind.  And the second-love your neighbor as yourself.”  That guy did just that. he helped me emmensly and got my car to the shop.  Louie was fixed within a couple of hours and she’s running like a champ.  Keep your eyes open for someone in need today.  Love your neighbor.  Pay it forward.  This sums up the Faith that we hold onto.  This sums up how we should live. 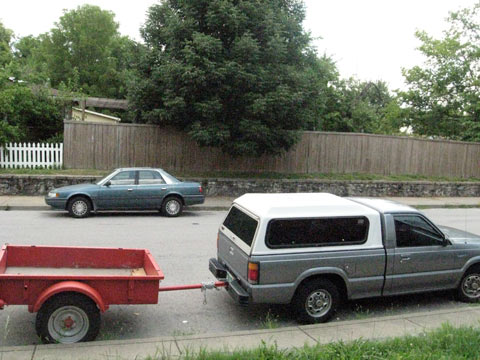 “What Burns Down Doesn’t Burn Out” by Sam Bowman

“Life After a Miscarriage” by Rebekah Chamberlin

“Out of Control” by Me In Motion