Well, May 18th has come and gone, and the long-awaited appointment to find out the gender of the baby has finally been had.

Before I proceed, I must give a little backstory: I recently attended a Remedy Drive concert in New Jersey where pastor / author Jarrod Jones happened to be speaking before the show. Jarrod actually has written over 15 blogs for Jesusfreakhideout.com and this was the first time we ever got some face time to chat a bit. In telling him about my pending parenthood, he shared the story of how he and his wife decided to find out the sex of their baby ahead of time, but instead of being told by a nurse or doctor, they decided to have them write it down on a piece of paper, slip it into an envelope and pass it on to them for reading later. They then went out to a nice dinner – just the two of them – and opened the envelope together to see what they were having. They not only did this once, but for BOTH of their children and highly recommended it.

Now that credit has been given where credit is due, I proposed the idea to Amy who at first was a bit undecided how to process such a notion (WAITING longer to find out what she’s carrying?!), but soon loved the idea. So we planned to make a night out of it — our 5pm appointment, then an hour drive to the Philadelphia area for a little PF Chang’s and then over to IMAX for a movie (Iron Man 2! … since she hadn’t seen it yet 🙂 ) if she was feeling up to it.

At the appointment, we got to see them lather up Amy’s belly with blue jelly (looked like hair gel) and use what looked like the buzzer from the game Taboo attached to a cord as the transmitter for the images. Amy filled the nice nurse in on our dinner plans (and the reveal) and she kindly respected our wishes. We got to see a slew of views of the little munchkin as she took screen shots of all areas of the baby’s body. Perty cool. The little tyke was constantly moving too!

So we put the mysterious envelope into the trunk of our car and drove down to the Plymouth Meeting area for dinner. Upon getting there, we had to wait a bit to be seated, leaving me sitting on a booth by myself in the lobby as Amy hit the restrooms (Y’know those pregnant women…). That white envelope stared at me a bit… taunting me with its knowledge, but I found resisting the temptation to peek easy enough. We’ve waited this long!

When we sat down to dinner, I put the envelope aside at the table, and we got down to business in ordering and such. We both seemed to try to ignore the presence of the envelope. Perhaps the anxiety of finding out was stopping us a bit… Everyone – including Amy – thinks it’s a girl… so are they right? I’m resorting to the idea it’s a girl, but could it be a little fella?! … Dinner was over and we contemplated a little celebratory dessert. Amy finally confronted the room’s resident elephant.

I then realized that maybe having such a big life moment at the control of our fingertips was a bit too much for us to handle. I then equated the idea of the nurse being able to tell us as just ripping the proverbial Bandaid off all at once – in one vicious swipe. We’d been slowly, painfully pulling it for hours now.

We agreed to just do it, and Amy moved to my side of the booth. I opened the envelope (“And the Dove Award for “New Baby of the Year” goes to….”). Our eyes darted around the ultrasound printout for where on the photo the nurse had printed the answer to our current life’s greatest question.

I couldn’t find anything.

“OH MY GOSH!” Amy squealed with excitement and shock. “What?!” I asked. The photo read “It’s a BOY!!!!” We were both pretty dang shocked. Just then, a server brought us our Great Wall of Chocolate cake slice. I immediately dug in while Amy still tried to wrap her head around the whole thing. I, a proud Dad-to-be of a baby boy began consuming the delectable, savory Great Wall.

The whole thing seems a lot more personal now. It’s not an “it” we’re having. It’s a little HIM! My mind’s still reeling a bit.

Oh, and I guess we’ll be needing those Pee-Pee TeePee‘s I mentioned before AFTER all! 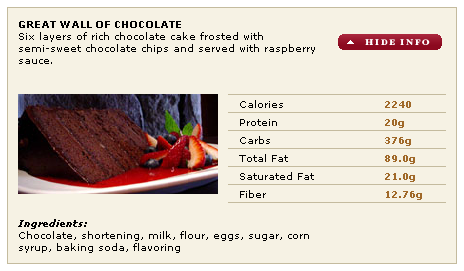