If there’s one thing I’m learning as a new parent, it’s the importance of good baby toys. 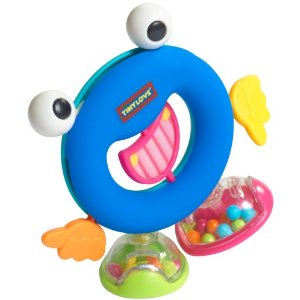 I’m sure I’ve mentioned this toy before, but I believe it deserves its own post dedicated entirely to it’s goofy ring-shaped, floppy-eyeballed design. The “Tinylove” is a bizarro rattle that is altogether ridiculous in appearance but incredibly useful… at least, that is, for OUR son. (and I realize now that “Tiny Love” is the brand… but to me, this rattle IS “Tinylove”… especially since it says it on the rattle)

There have been many occasions when the only thing to snap our kiddo out of a crying fit has been to vigorously shake the living daylights out of this little friend in front of his face. There are two plastic eyeballs that shift back and forth at the top of this thing, and when shaken fast, it makes a loud (sometimes TOO loud) and obnoxious hollow-plastic sound. It apparently is like an air-horn for a baby. The dangling feet on this little toy are filled with beads that make for a good rattle. So, once you snap junior out of his or her hissy fit, you can lull them into submission with a gentle rocking of the Tinylove’s feet.

This morning, as I was in my office trying to focus on tackling a project, our 5+-month old son was in his swing, whining and fighting the sleep that wanted (and needed) to come over him. He continued to whine over the course of about a half hour. At first it was cute and playful, but then he started to lose it and grow increasingly fussy and upset. It then dawned on me that what he might need is a little assistance. The swing itself wasn’t cutting it. I saw the “Tinylove” within reach and grabbed it, holding it over his head. First I shook it to snap him out of his growing fussiness. He immediately turned his head and rolled his eyes closed. I felt a little like a snake charmer working his magic. I then switched my grip on the “Tinylove” to rock the feet gently back and forth for more of a rattle sound. With his eyes closed, my son briefly made a soft whine before totally giving in to the sleep he had been so desperately fighting. I can joyfully type to you that he is still peacefully asleep.

Check out this little gem on Amazon.com 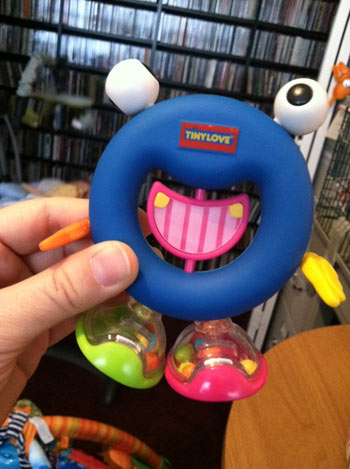 “Reaching the Unreachable” by J.M. Farro