So we’re currently in our van driving home from a show in Richmond VA last night, which was a lot of fun, except for the fact that my guitar kept going out on me during the show. Not to mention, the light controller crashed before the show. And also, the power for the entire building shut down halfway through our set. But besides that, it was a blast, and the folks in Richmond were super fun. What else matters at the end of the day anyway? 🙂

This was not the first show that my guitar has went out on me. In fact, I feel like the past several shows, I’ve had some kind of different issue with it every time. Last night, the first thing to go out on it was my wireless pack. The cable that connects my guitar to the wireless transmitter apparently has developed a short in it. But no worries, our road manager Josh came to the rescue with a guitar cord to replace the wireless. So we’re good to go…for a minute anyway.

It works fine about halfway through the next song, and then something in my pedalboard started making tons on loud alien noises and then all of a sudden just went out altogether. I did what any intelligent person would do when this happens, and I kicked it several times, hoping that it would work out whatever kink it was experiencing. But no, that didn’t work. So I bent down and unplugged my volume pedal and just bypassed it, hoping that this would fix the problem, as I’ve  had issues with them in the past. But no, that didn’t work either. Meanwhile, Tim and Dex were still playing and I was having to keep the vocals going on top of all of this.

I got so frustrated that I just said in my head “forget it”, and unplugged the entire pedal board and went straight into one of my amps, going “old-school” again.
Luckily enough, this worked well enough to get us through the rest of the show.

Now as frustrating as this all was, it reminds me of a simple fact that I feel that God teaches me over and over again in my life, and it’s simply GETTING BACK TO THE SOURCE. When I just took my guitar and plugged it straight into the amp, there was no room for error, and it just worked fine. With everything in between, there is a risk that any one of the small little cables or power supplies could go wrong at any given time.

This is the same with our lives, and the relationship we have with our creator. When we fill our lives with clutter that we so often think is essential to our survival, our “direct connection” to God gets fuzzy, and can sometimes get cut off. We forget that He is the reason for our being, and that He is the one true source of our purpose and balance. It’s my prayer today for myself, and for everyone reading right now, that we are just reminded to get right back to “the source”, and make sure there is nothing standing in the way. 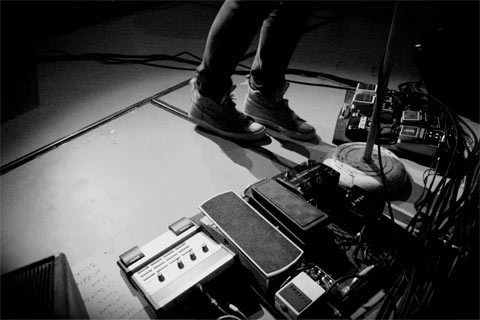 “Rebuild Your Love Tour Days 11 – 14” by The Great Transparency

“Making ‘The Losers’ VLOG” by Me In Motion