It’s funny to think that a year ago, I never would’ve guessed I’d be where I am today. Amy and I just had another ultrasound on Tuesday. The little guy is doing really well (thank God)! He was covering his little face, so we couldn’t see the 3D ultrasound, but I admit it was good to see him again in 2D.

It’s such a different world to be immersed in… parenthood, pregnancy, etc (I even got a few Father’s Day wishes last month!). But it’s intimidating to ponder how much things will change once little Will arrives. I’ve changed our spare bedroom around — it used to feature concert shots I’ve taken on the wall, but I’ve replaced each one with characters from animated movies or TV shows… ones that I anticipate he’ll love (but most of them, I do! 😉 ). Even just the other day, I dug a Garfield lightswitch cover out of my Garfield collection (I’ve been collecting since 3rd grade, haha) that I used to have in my room and put it in his. Previously, the room was seldom used, as it was mostly overflow from whatever couldn’t fit in other rooms, including my drafting table for when I got the itch to draw. In just a few short months, that room will officially be handed down to him as the DiBiase duo becomes a trio! 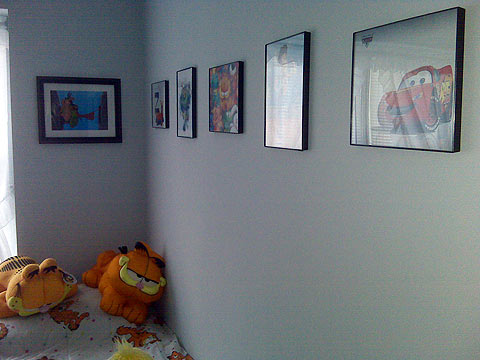 I’ve never done well with “the unknown.” Heck, it’s why we decided to find out the gender of the baby as soon as we could. So with parenthood being this huge unknown for me, I keep going through waves of excitement and fear. I may have said this before, but part of me just wants to get this thing started already! 🙂 But I know there’s a good reason for it taking 9 months to get ready for parenthood… and God always has a plan when patience is involved.

But as we get closer and closer to the early October due date… this new world of babyhood is picking up steam! Amy’s baby-belly is getting bigger… Will’s over 2 pounds already… We’ve worked out the baby registry… the nursery’s slowly coming together…  and most of the family and friends’ conversation (especially with other friends either having kids already or are also currently pregnant) turning to that of either giving birth or raising little ones… we’re quite in the thick of it!

We Recommend: Rebecca St. James, “If I Had One Chance to Tell You Something”