As we adjust to having a cranky, insatiable miniature person in our home, I though I’d revisit last week’s events that led up to Will’s big entrance. This is the untold story.

Last Thursday night, Sept. 30, Amy had been struggling with more intense contractions than usual and decided to get checked out after work. They informed her that she was still only 1cm dilated… Which showed no progression in 3 weeks! Her due date was Oct. 4 and time was getting down to the wire and we had BOTH been growing very uncomfortable. Docs had told Amy a month ago that she would deliver and here she was still pregnant, in a lot of pain and showing no progress. Thanks, Doc.

That night, she picked up some Italian food from a restaurant near the hospital that she works at and we sat down to watch a movie (upon learning that one of our favorite actors, Tony Curtis had died the night before, we decided to honor him by watching Operation Petticoat). As Amy often does after eating, she passed out on the couch while I went upstairs to my office to work. Over the course of the next several hours, I could hear her usual pregnant snoring, but this time, it was different… She was stirring more while sleeping and even groaning in pain. The contractions were getting much worse.

The next morning, I awoke uncharacteristically early to find that Amy was staying home from work – something she just doesn’t do. I think if our city was being ravaged by a hundred foot marshmallow man, she’d still feel compelled to report for work (after all, a cataclysmic event like that one would likely cause injuries… so they’d need a nurse, right?). I carried on with my usual work duties, feeling that there was a very good chance we could end up on the labor and delivery unit soon. Just as I was wrapping up my work, I received a text message from my wife… “Are you getting my messages??”

See… Amy and I both have Blackberry phones, so we have this addicting little way of communicating from anywhere we might be in the world… by Blackberry Messenger. But since Blackberrys really aren’t very good phones, they tend to lock up or run out of memory faster than Superman changing into his jammies. So, apparently, when she needed me to be receiving her messages the most… I just wasn’t.

Upon receiving the text, I dashed to the bedroom where she was sitting in her bathroom using labor breathing techniques to get through a contraction. She told me to call my mom and let her know that it’s time to go to the hospital. What was serious about that was – she’d been having contractions for well over a month. We’d hoped it was “time” many, many nights. And every time she got a nasty contraction, she insisted it wasn’t time and that they’d have to get a lot worse. And now they had.

Things needed to be done before we could leave, so we carried on with getting showered and packed and ready to go… in the most calm way you’d not expect, actually. No running around frantically. No leaving the mom and driving off to the hospital without her. We actually kept our wits about us!

Around 12:30/1pm ish, I drove Amy to the hospital… which was maybe 5 minutes away, and played some soothing tracks from Jars Of Clay’s latest album, The Shelter, as she used labor breathing throughout the car ride. We parked and, despite calling ahead for a wheelchair, we were not met with an escort at the hospital entrance. As we walked down the hallway, I stopped a wonderful nurse who ran off to get Amy a wheelchair. Before long, we were at the Triage, and me, Amy, and my mom found ourselves in a closet-sized hospital room in the Triage. It was stuffy, tiny, and extremely uncomfortable. Even Amy’s hospital bed was much too small for her. The poor girl rolled back and forth in discomfort as she tried to get through the breathing. The nurse watched her breathing technique in awe and remarked that we should have a video camera to tape her breathing as an example for other women in labor to use. Nice, but not practical. “Hey hon. Look here! Yup. SMILE! No, no… not grimace…. stop rolling… you’re gonna look goofy on this video!” Yeah, I don’t think that would have worked out. And she probably would have had me swallow the electronic device quite forcefully. (I jest.)

After much too long, we were moved to her actual delivery room and the waiting began. When asked if she’d take an epidural, Amy emphatically replied, “YES!” which surprised me after all the talk she’d had about not wanting one. Yep, poor kid. The pain was that bad…

I waited around with my parents while Amy adjusted to the epidural and even nodded off for an hour or two of sleep. Later that evening, before 6:30pm, her doctor came in to check her. She was 8cm dilated (we needed her to be at 10) and he broke her water. The waiting game continued… At around 8:15pm, we were told she was officially 9cm dilated… but the waiting had to continue.

When she had reached 10cm, it was around 11pm and they began prepping her for pushing. See folks, I know my limits. I have a weak stomach when it comes to blood and gross stuff. I don’t like gory movies or stories about hospital procedures. I’m a wuss. I know I am. I’m okay with that. So when it came to watching the birth, I checked out. Sure, I was in the room. In fact, I was beside Amy’s bed all the way… by her head… and kinda behind the bed a bit. My mom was the real trooper. Amy had wanted her to kind of be her support coach of sorts through the delivery and so she helped Amy with the pushing and did a phenomenal job. I, on the other hand, did not emerge from my hiding place until everything was cleaned up. Yeap.

“Have you been bad?” a nurse peeked around my mom to confront little old me in the corner.

At around 11:25pm, Amy began pushing. With each push, the nurses and doctors kept expressing their amazement at how strong of a pusher she was. I believe “Power Pusher” are the words they used.

And a power pusher indeed! They said it took most mothers a half hour to get as far as she did with her FIRST push! And at 11:59pm, little William “Will” Peter DiBiase was born! Crazy. 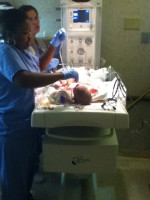 I could hear him cry, and my fears felt the same way… life would never be the same! Then I could tell that the nurses had some concern in their voices… he was breathing heavily with his abdomen. Apparently, that’s no good.

As they cleaned up both mom and baby, I kept hearing a nurse express how much poop Will kept dispelling. Apparently every time she got him clean, he pooped again. Each time, her voice became more and more surprised, “HE POOPED AGAIN?!!!!?!!” It was pretty funny. But I was concerned about their concern for his breathing. 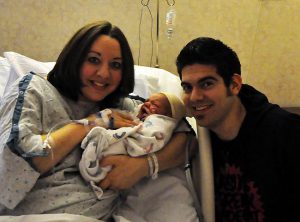 For the first time ever, I was holding my son. MY son. Wait… my son?! He was fussing a bit and looking around, making little grunting noises. Then he looked directly at me and froze. It was as if he knew who I was? He then looked away and started to fuss and then did it once more… looked at me and stopped. It was pretty cool. And if it weren’t for that connection, I think I would haven’t felt any connection at all. 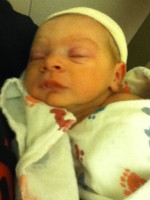 They soon took him away to weigh him and then take him to the nursery. Will weighed 7lbs, 9 oz and was 20 inches long.

My parents left soon afterwords and Amy and I were left alone in the delivery room. After more waiting, a nurse came in to inform us that Will had pneumothorax — pockets of air in his chest that didn’t belong there. They were concerned enough to admit him to the NICU… and Amy’s greatest fear was realized… she’d have to go to home without her baby.

Will spent the next couple days in the NICU. I slept on the midget-sized couch in the delivery room the first night, not getting any good sleep and feeling more like the living dead the next day than a new dad. I had gotten the weird opportunity that night of following the nurse as they delivered Will to the NICU. It was such a bizarre feeling. We were no strangers to having pets in intensive care (oh, you pet owners understand!), but this was weird… a baby… that was ours somehow… was now in a situation we’re kind of familiar with. It was odd. 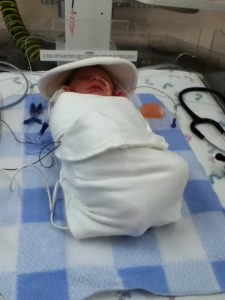 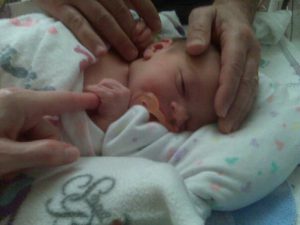 But on Sunday night, October 3rd, after both mother and baby had shown a lot of improvement, Amy was allowed to come home, but Will had to stay in the NICU. On Monday, Amy spent most of the day at the NICU to care for him, and they finally had taken the ugly feeding tube out of his nose. Then, by Tuesday night, October 5th, I was able to pick up Amy (who was visiting him) and baby at the NICU to take little Will home. And so our adventure began… 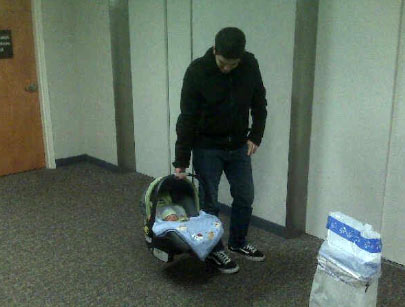