Yesterday we embarked on the maiden voyage of the Moses basket!!!  For those of you wondering, this did not involve me putting Will in the stereotypical baby basket and sending him down the Lehigh River … it did however, involve that I got the beautiful basket out of the corner of Will’s nursery where it had been patiently waiting for its first use.  I guess my thoughts began with thinking … well, I might as well try this now before he gets too big and can no longer fit into it.  I then considered, that if he screams and cries and the attempt becomes yet another failed positioning item that meant to quiet and soothe him, but instead sends him into a screaming rage … at least we would know the outcome of what would happen if we just give it a try.

My plan was to have Will in our office, where John spends countless hours of his days working on his websites – Jesusfreakhideout.com and this new little bundle of joy, LittleJesusFreaks.com.  ;o)  I guess my goal was to occupy the open counter top-like space on John’s elaborate desk, where I could spread out all my thank you notes and try to make some sense of them.  Although I was able to send out almost all of the thank you notes for items that were given to us for Will before he was born … I seem to find myself struggling with getting the thank you notes done for items that were given to us for him after his birth.  Perhaps this is because it requires me to now be caring for him endlessly through the many hours in a day when I think I used to have “down time” in my life.  I guess it is simply a mommyhood wake-up call that I have been ignoring … but, I think my tank of “down time” has long been on E.  Therefore, the need arises in my life, for ways that I can safely put Will down in “something” … whether it be his crib, our couch, his swing, changing table, Newborn napper, or now the possibility of using the Moses basket, hoping that he will be content enough in any one of these positioning devices for a long enough amount of time that would allow for me to get something done.  Usually, this might be for me to take a shower, go to the bathroom, or try to have something to eat … but today, it was for the reason of me trying to work on my thank you notes project.

I also was hoping to initiate the Moses basket in our office, because the room is somewhat limiting to where I can put Will, leaving the only available place in either the arms of John or myself. So, I momentarily put Will down on the spare bed in his nursery, where I have been sleeping most nights in an attempt to care for his breast feeding needs to the best of my ability.  By keeping myself in such close vicinity to him, I am so much more able to hear his subtle cries of hunger, instead of being totally removed from him and relying on a video monitor to wake me out of a sound sleep when he has already completely lost it.

Preparing the Moses basket was not too difficult, because the previous owner who passed it down to me included a beautiful padded bumper ruffle inside the basket complete with a mini mattress pad for comfort.  My challenge was to attempt to cover these precious items in order to prevent Will’s lovely regurgitated breast milk from baptizing the pretty white linens.  I simply tried to put a few blankets under him and around him so that he would feel cozy in a new environment while at the same time, making sure the basket linens were somewhat protected. 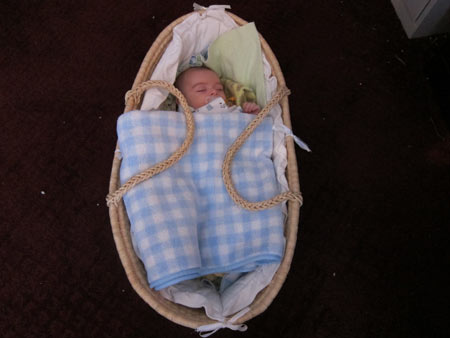 Surprisingly enough, Will did not protest too badly when I finally was able to place him in the Moses basket.  It was after I had been holding him in a side-lying cradle position in my arms, similar to a breast feeding position of “tummy-to-tummy” or what is otherwise known as the standard across the tummy position for feeding.  So, I figured I would attempt to put him down in the basket with him remaining on his side, hoping to imitate the position that was working well already.  I figured if I lay him down on his back, it might be too much of a change, that would add to the stress of already trying something very new.  Believe it or not, I next heard this little voice inside my head that said, “you should now try to swing him a little bit while he is in the basket.”  One thing that I have definitely learned as a new mom, is you really want to go with these little voices when you hear them … because they usually ultimately never let you down!  ;o)

I began the swinging of the basket with him in it, made possible by the sturdy woven dual handles on the side of the basket.  Within a few minutes of the peaceful rocking motion, I could not believe what I was seeing.  My eyes told me that his eyes were actually starting to close!  Could this be possible???  I was tickled with the idea of this basket being so successful upon it’s maiden voyage!  I continued the rocking motion of the basket until I felt fairly safe with his intensity of sleepiness.  And what followed after that fun swing for me, which also seemed to give my right arm a bit of a work out … resulted in well over an hour of blissful sleep for my now 2-month-old son.  ;o)

I not only was able to get what seemed like a lot accomplished with my thank you notes project, but I realized that this saving grace Moses basket is also portable!  I was able to bring Will down into our kitchen with me while I completed some simple chores like emptying our dishwasher, and filling it up again – which mind you, is rather difficult when you are trying to hold a little person at the same time.  I also was amazed at the ability for me to simply use the tapping action of my foot to gently rock the basket whenever he would stir.  This calming motion was enough to help him get back to sleep.  I couldn’t be happier!!!  :o)  Not only was I getting things done around our house, he was also sound asleep in this miracle basket!

My next thought that came to mind, was my wanting to share this new development with John.  I was sincerely hoping that he, too would be equally amazed at how much Will appeared to love this new option for us to be able to put him down in a safe place.  I was also kinda hoping John would realize that this is yet another possibility that might actually allow us to spend more time together, which has been very challenging to put it plainly since the addition of Will to our family.  Without John knowing anything about me trying the basket out for the first time, I thought it might be cute to try to surprise him with my accomplishment by placing the basket down with Will sleeping in it right next to his chair in the office.  I will never forget the look of amazement on John’s face when he slightly turned his chair around to see his adorable sleeping son in this beautiful basket beside him.  It was a true moment of success for us as new parents!!!  ;o)

Not only was the Moses basket extremely useful for Will’s afternoon nap, it was put back into action later on at night when John and I were attempting to have dinner while watching a movie.  I was determined to have Will asleep and in his crib before John came home with our take-out Chinese food dinner.  But, alas, I continue to be unrealistically optimistic at times about how I can dictate the behavior of a baby.  Will definitely has a mind of his own, and his decision last night was not to peacefully fall asleep in his crib like a good little angel.  Instead, he was restless, and perhaps just wanted to spend some more time with Mommy and Daddy.  Regardless, I was not going to continue my struggle with him in the nursery trying to get him to fall asleep when he was dead set against it.  So, into the Moses basket he went, and down to the living room we went to join John, patiently waiting to start the movie.  The result was that the miracle basket had worked again!  Within about the next hour, he finally was able to fall asleep, with the gentle rocking of the basket with my foot.  It terrified me to think that I might have otherwise spent over an hour in his nursery with him and me getting more and more frustrated with his resistance to sleep.  Fortunately, John and I were actually able to eat our dinner together, while it was still hot, and while enjoying one of our favorite past times … watching a movie together.  My prayers tonight before I go to bed, will definitely include how incredibly thankful I am for this new way of us being able to put Will down while still being around us.  The Moses basket is truly a heavenly blessing!  ;o) 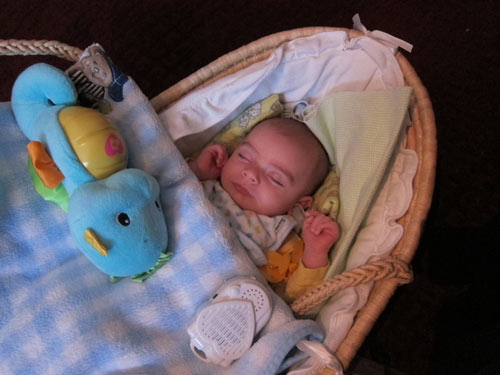 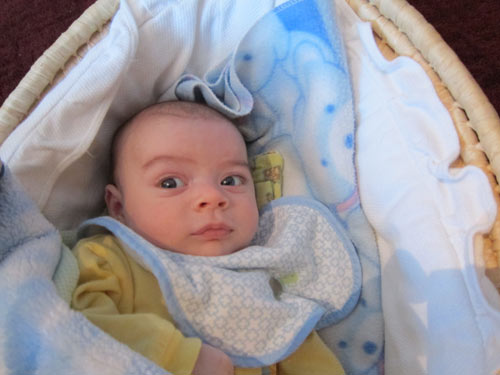 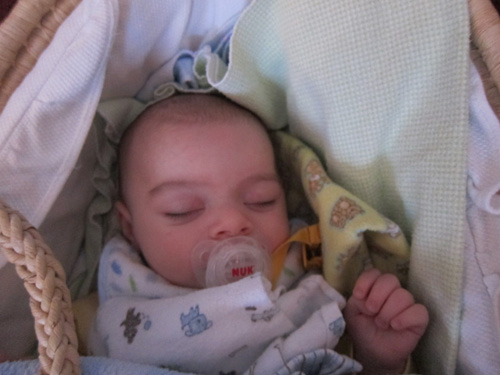 “In the Days to Come, You’ll Understand” by J.M. Farro