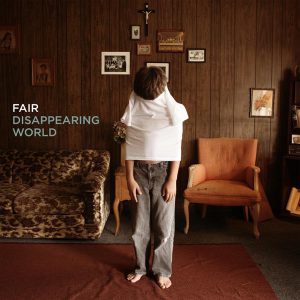 As another year of music draws to a close this week, it seems appropriate to look back over 2010’s catalog of releases to highlight some of the standout albums of the year. Producer extraordinaire Aaron Sprinkle finally released his band Fair‘s sophomore album, entitled Disappearing World on Tooth & Nail Records in February. Melodlic, thoughtful, and wonderfully catchy, it’s a deep album that offers plenty to chew on while being one of the most accessible projects Sprinkle has lended his soft vocals to. Hopefully 2011 will have more projects as notable as this one.
– John DiBiase

Our synopsis: “One of the best records to release in 2010, Fair’s second effort is a triumphant, catchy indie rock record.” (Recommended by JFH’s John DiBiase)
Perfect For: Relationships, Hope
Song Highlights: “Disappearing World,” “Walking In My Sleep,” “Take Some Risks,” “It’s Doubtful,” “Anymore”

So, what are your thoughts on and experiences with the album Disappearing World? Do you recommend it? If so, why?

“Take Heart! Everyone Else is as Stupid as You” by Josh Taylor

“God Knows Better Than We Do…” by John DiBiase