So, my original concept idea for this blog was to pit a release from 10 years ago with a new release from the same artist 10 years later (so, it’d be like, for example, Steven Curtis Chapman’s 2001 Declaration album versus his announced new release for sometime this year… which hopefully I’ll actually write about at some point this year). Unfortunately, that idea really limits where this blog can go, so as exemplified in the previous blog by looking at Audio Adrenaline’s 2001 best-of album, Hit Parade, we’re going to take a look now at Skillet‘s Alien Youth album from 2001… and of course see how it stacks up against their latest album, their most current album, their 2009 release, Awake. 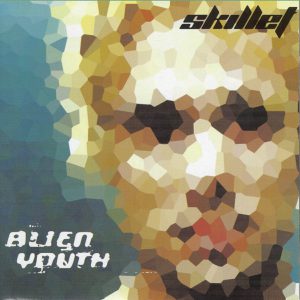 When I was a teenager, Skillet released their self-titled debut in 1996 (shortly after I started JFH actually… yeah, I just really dated myself). So, needless to say, I’ve followed Skilet closely since Ardent and Forefront put out the Bleach/Skillet sampler disc in the summer of ’96 (which, incidentally was Eddie DeGarmo, who ran Forefront, and Dana Key, who ran Ardent, having a wee little friendly competition with their artists… since Bleach was on Forefront and Skillet on Ardent). Skllet began as more of a grunge rock three-piece before shifting to electronic rock with their 1998 sophomore project, then going even more electronic for their 2000 album Invincible (when they became a four-piece and frontman John Cooper’s wife Korey first joined). Their late summer release, Alien Youth, in 2001 took the sound more into the realm of industrial rock as current guitarist Ben Kasica made his debut in the band and Lori Peters entered as the Skillet’s first female drummer. Technically, Alien Youth could probably be considered an pivotal point of the band’s evolution into who they are today.

It’s no secret that Skillet has grown into quite the commercial success these days. Their live shows are big and rather epic, their songs are relatable and their music is catchy. But in 2001, Skillet was still exclusively a Christian market band and the most notable difference about their songs on Alien Youth is the subject matter. While Awake continues more of the relationship-oriented themes that were explored on Collide and even more so on Comatose, Alien Youth was a sort of call-to-arms for the young Christian generation. Where dc Talk created a mult-generational anthem with their 1995 song “Jesus Freak,” “Alien Youth,” the song and the album, gave young believers (particularly who are also fans of accessible industrial rock) an anthem. While I would probably be more inclined to listen to Alien Youth before Awake on any given day (my initial thoughts and feelings of disappoint that I shared in 2009 have not changed), I must admit that Awake does bear a more professional sound and feel. However, for the most part, it feels emptier in comparison when it comes to lyrics and themes. While I would probably regard “Hero” as the best track on Awake, there are several tracks on Alien Youth that impacted me ten years ago and that I would still consider to be inspiring today.

The first of these tracks is “The Thirst Is Taking Over” (lyrics). It’s moody, pensive, and features a great building from the atmospheric and haunting intro until it’s large climactic finish. It bears a distinct worship feel in the lyrics that doesn’t succomb to the over-used and stale sound of most of corporate worship. In other words, it’s unofficially “worship” without being genre-specific.

It would be really hard for Skillet to have lyrics like these on an album today (given their mainstream appeal), but I have to admit it’s one aspect of the band that I do miss. Thankfully, they’re still open and unashamed to talk about their faith today.

Another song highlight is in “Will You Be There” (lyrics), a lovely five-minute ballad that definitely feels more dated in 2011, but is a nice duet between John and Korey. Lyrically, the pair sing out doubts in a prayerful way to their Savior, asking Him if He really will be reliable and present in the dark and difficult times.

When I’m in retreat,
Can I run to you?
Will my pain release
At Your mercy seat?

Of course, not all of Alien Youth is quite as memorable or impacting. Cooper’s response to a live show experience from Marilyn Manson in “Ripping Me Off” is pretty corny (despite having an important message) while “Stronger” uses quirky vocal effects and a frenetic approach that doesn’t work as well as the rest of the album. In addition to the aforementioned tracks, two rocker stand-outs on here have to be mentioned. “Eating Me Away” is a sweet rock track about conversing with God about our struggle with our sinfulness and humanity, and the appropriate follow-up to it, the aggressive “Kill Me Heal Me.” Skillet had the incredible ability to package spiritually meaty songs in a musical packaging that listeners who wouldn’t normally listen to contemporary Christian radio could still get some musical food for their soul. It’s projects like this that spoke to me personally as a teenager and an early-twenty-something (when this released in 2001) that seems so scarce to find in today’s Christian rock. Alien Youth rocked really hard when it rocked and then stripped things way down to just a piano with the closing ballad, “Come My Way” – which was sort of the “ugly duckling” of the album. It doesn’t really fit in musically and leaves the listener with an almost-lullaby after such an energetic album, but lyrically it’s a beauty as John and Korey ask God to come to them so that they might be healed.

I realize this is quite the lengthy examination of Skillet’s fourth full-length studio album (and comparing who they were then with their career today), but it’s enjoyable to revisit some older and often forgotten releases like this one. Panheads who don’t own this one should check it out, while those feeling a little empty about some of today’s rock music – and won’t mind a slightly dated early-2000’s electronic rock release – should also check this one out. Not all of Alien Youth holds up as well today, but it still offers some true diamonds in the rough.

10 Years Later: Relient K, “The Anatomy of the Tongue in Cheek”

“If I Were a Musician” by Mark Rice