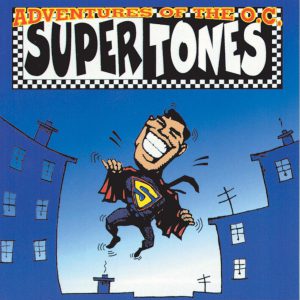 It’s been over a decade and a half since the height of the third wave ska movement.  The O.C. Supertones were able to help spread the movement into the Christian music industry because of the success of acts like the Mighty Mighty Bosstones and Reel Big Fish.  Matt Morginsky and crew had several good albums throughout the course of their career, but none of them were ever quite as good as Adventures.

Adventures, a ska masterpiece, remains my favorite ska album of all time.  While their second, Supertones Strike Back, Five Iron Frenzy’s Our Newest Album Ever, and The Insyderz Fight of My Life are all superb 90s ska albums, I always come back to Adventures to get my ska fix.  The album is loaded with can’t miss, sing-a-long tracks.  There isn’t one bad apple on the 36 minute, 12-track debut.  Lyrics don’t get much better than “He Will Always Be There” as Morginsky proclaims, “I didn’t even know who God was, then He told me He’s my Dad.  And it’s because He loved and He’d rather die than live without me, He loved me and He’d rather go through Hell then go to Heaven without me.  And I’ll love Him and I’ll stay with Him until the end of time.  One thing I know: God gave his life for mine!”

Though the Supertones started leaning towards a more unique hip-hop/ska approach, they never lost sight of the message.  I still remember Jason reading from the Bible on stage almost every time I saw them.  I just stood amazed that this crazy band was reading the Bible when other people like Steven Curtis Chapman weren’t doing anything similar.  If you were too young, or just sleeping through the mid-90s, this album is a must have.

Our synopsis: “The album and band that helped to usher in the third wave ska era into the Christian industry.” (Recommended by JFH’s Michael Weaver)
Perfect For: Faith, Hope, Redemption, and of course skanking
Song Highlights: “Adonai,” “Who Can Be Against Me, “”Heaven,” “He Will Always Be There,” “Found”

So, what are your thoughts on and experiences with the album Adventures of the O.C. Supertones? Do you recommend it? If so, why?