The past few weeks have certainly been a mix of crazy-busy-ness and “firsts” as a parent. Little Will has grown two teeth, had his first sips of juice from a kiddie mug, and treated his Dad’s lap like a Jumperoo while rockin’ out to music on my office stereo — all in the past week or two.

Yesterday was another first for me. While Amy has taken Will to our local mall around Christmastime a few times, yesterday was the first time in many, many months that I’ve returned to the mall… and the first time as a father. My parents took me out to lunch (I had a pretty sweet free-entree birthday coupon from Bravo!, which was cool) and then we went for a walk around the mall. We plucked Will out of his car seat and strapped him into his stroller. It was unusually chilly and we hadn’t exactly dressed the little dude adequately… so we smothered him in blankets and I lowered the overhang on his stroller in front of his face to brace the wind. It worked (MacGyver would be proud), but we still felt like a bunch of bumbling morons (see photo below). As my mom put it — we were like Laurel & Hardy’s Child Care or something. 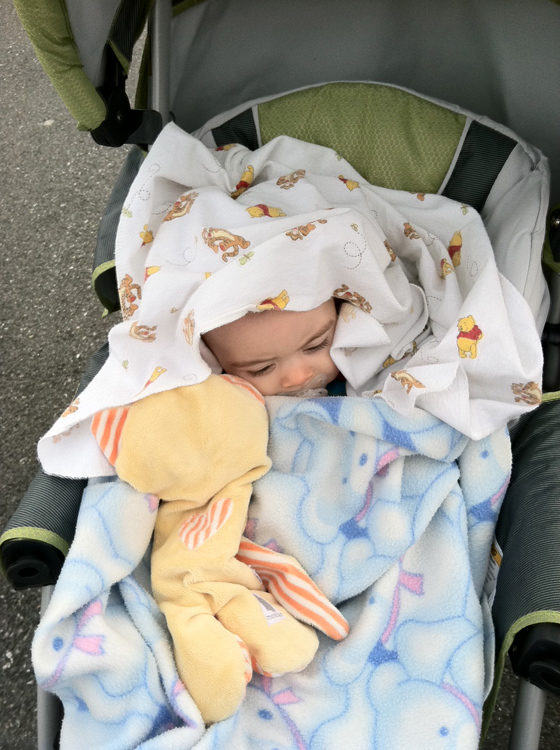 As I pushed Will’s stroller around the mall, I noticed a few things. For one, I’m getting old. Secondly… when did all those new stores get put in??? Has it really been that long since I’d visited this multi-retailer establishment? This is the same mall I used to go to for video games or ice cream or Garfield books as a kid or to just walk around with my friends. Now I was pushing a baby carriage and looking at all the other young people and Good Friday shoppers and feeling sorely misplaced.

Then my parents went to the bathroom… and that’s when Will decided he’d had enough of being good. One of my greatest fears is being one of “those parents” with a screaming baby in public (Coincidentally, Will just woke up from a nap and started screaming after I typed that). I found myself kneeling in front of his baby carriage and trying to distract him enough to keep him from losing it. Thankfully, it worked and Mr. Fussy Shorts didn’t go bonkers. After my parents returned and helped distract him, we raided Hallmark, loaded him into the car, and the little beastie fell right to sleep.

…And now for his first Easter! 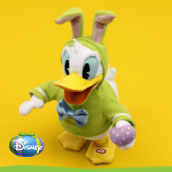 “More To This Life” by Amy DiBiase