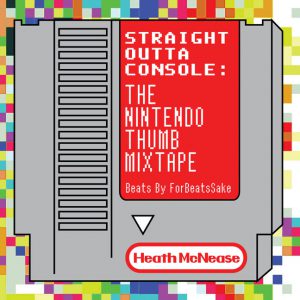 If you looked up “hard-working musician” in the dictionary, and for some reason it was actually in there, you might find Heath McNease‘s name somewhere in the definition.  When he’s not touring, he’s working on his next project.  He’s dropped two so far this year, and has at least one more planned for release before year’s end.  The second album he put out in 2011 is a free mixtape with For Beats’ Sake based all on Nintendo games.  Straight Outta Console: The Nintendo Thumb Mixtape features 8-bit NES music converted into modern-style hip hop beats, with McNease’s excellent skill on the raps — not to mention a slew of talented emcees making guest appearances.  The majority of the time, McNease just has fun, rapping about video games teaching your mom how to dougie.  Those looking for spirituality will find a little in “Mmm…Donuts!” but it’s really recommended just for enjoying some quality hip hop.  I loved McNease’s music before, but this mixtape cemented him as one of my top current emcees.  It also gave me even more appreciation for For Beats’ Sake’s talent, as he demonstrates his creativity from beginning to end.  Check it out…you’ve got nothing to lose except about an hour of your time.
– Scott Fryberger

So, what are your thoughts on and experiences with the album Straight Outta Console? Do you recommend it? If so, why?

Advice for New Parents from Jars of Clay

We Recommend: Maylene and the Sons of Disaster, “II”