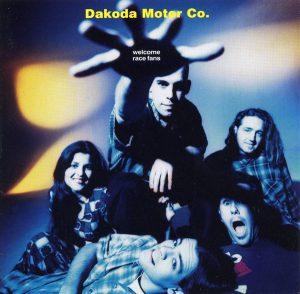 I was listening to a playlist of favorite songs on shuffle today when Dakoda Motor Co.‘s “Truth” from their album Welcome Race Fans came on. Dakoda was another favorite of the early to mid-90s, and Welcome Race Fans marked the end of an era (despite a very brief one) for the band of surf rockers.

Dakoda Motor Co. debuted in 1991 with their album Into The Son, under the band name “Dakoda.” They had to add “Motor Co.” on the 1993 label release of the album for legal reasons. I remember seeing the video for “Grey Clouds” on then-popular Christian music video show Signal Exchange and really not liking the visuals for it (I totally love the song now though). However, their other video, “Sondancer,” which was comprised of surf footage, coupled with hearing the music from friends who also liked them, helped turn me towards being an earnest Dakoda fan. It didn’t hurt either that, in 1994, when I was really starting to get into Christian pop and rock music, that Welcome Race Fans struck a chord with me.

However, Welcome Race Fans was one of those albums that was hugely hit and miss for me. It’s not often for me to find an album where I literally love half of it and don’t care for most of the rest of it (or am on the fence about it). While I still enjoy Into the Son from front to back, Welcome Race Fans seemed to display the image of a band starting to stray pretty quickly from their roots. Their folksy, “Jesus Music” sound was mostly replaced by crunchy guitars, glistening production, and bizarre musical twists and turns. While this actually worked beautifully for album opener “Alive” and “Trip To Pain” (which saw a beautifully bizarre music video treatment from director/artist/producer Steve Taylor), songs like “Uglier,” “Where Did It Go?” and “Rockin’ In The Mall” just seemed far out of left field. To contrast, songs like “Love Runs Home,” “Ooh, That Girl” and “Friend In My Eyes” seemed like the complete opposite end of the spectrum from the rockier tracks. They stripped it way back giving the album this uneven, schizophrenic vibe. It’s as if you took a couple different projects and just shuffled songs from each one.

Around 1995, lead vocalist Davia Vallesillo left the band and was replaced by Melissa Brewer. (It was that version of DMC that I only saw live once. To this day, I never had the chance to see Davia perform with them.) Brewer would go on to record one album–and the band’s final one–in 1996, titled Railroad, but Dakoda as fans knew and loved them would never be the same after Davia’s departure. Around 2006, the band reunited with Davia and began playing shows again with the intentions of recording a new album (a brand new demo called “On My Way Home” could be heard on their Myspace page for a while), but they broke up in 2007 after realizing their schedules just weren’t going to gel for the band to do music together again.

Welcome Race Fans still has some gems on it to this day, twenty years later. “Alive” is still one of my all-time favorites, with “Trip To Pain” being a close second to it. “Truth,” “Free” and “Stand Up” are all also fun, upbeat tracks. If the album had been an EP of just these five songs, it’d have been one incredibly solid project. All of them are still in regular rotation for me.

Revisiting the rest of the album (which have spent years absent from my mp3 library): “Uglier” is a quirky, pop-punk number about Jesus bearing all of our faults and sin; “Love Runs Home” is a stripped-down acoustic pop love ballad that feels as though it snuck its way onto the wrong album; “Where Did It Go?” is a hyper pop punk track (where guitarist Peter King literally shouts gibberish repeatedly) that wears thin a little too quickly; “Ooh, That Girl” is a pop rock tune about admiring a girl whose faith radiates an attractive difference about her; “Friend In My Eyes” was an acoustic song (with horns?) that begged to become a wedding song; and “Rockin’ In The Mall” is an under-2-minute finale that… was rockabilly. Some of these styles were prominent on their debut, but the rawness of that production (and Davia’s layered vocals) worked in the favor of those songs. King also upped his vocal contributions on this album, stepping in to replace or sing with Davia more often.

While Welcome Race Fans doesn’t exactly hold up as a whole 20 years later, it still has a few highlights that should not be overlooked. Dakoda Motor Co. was a talented bunch of Californians that went before their time. I would have loved to see Davia stick with the gang as they continued to make music. (And I would have LOVED to have heard a new album 7 years ago…)

You can find Welcome Race Fans on Amazon.com and AmazonMP3!

“100 Greatest Christian Albums of the 90s” by Josh Balogh

We Recommend: Spoken, “Echoes of the Spirit Still Dwell”

“Right and Wrong Ways to Discipline” by J.M. Farro