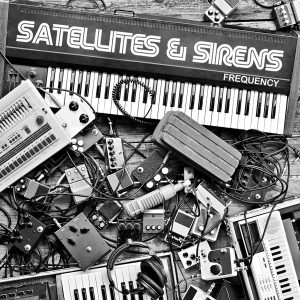 “It’s so scary when you’re on your own…”

…is a particularly appropriate lyric from our new song “Tell It”, featured on our upcoming new album “Frequency” (shameless, shameless new record plug…)… Admittedly the lyric was a looot less appropriate to our current situation when our former band mate, and still music collaborator Brandon Owens penned that line. Even so, here we are today,…doing this band thing largely on our own. No more record label, no money to fall back on, this baby is now riding on our own determination and desire to make it succeed. It’s a scary proposition for a band that has only ever existed within the context of having a big record label contract. I think sobering would be an appropriate word here. Sobering. Yes, that’s it. Nothing so extreme that it would cause the world to cave in on itself and turn into instant ash. But sobering…something that would cause you to sit back, take a thorough assessment of things at hand, and then decide what to do… Let’s visit this process, and where it has brought us…

First, let me be clear, we firmly believe God does things for a reason. Just as He blessed us with an initial recording contract that jump-started the career arc of this band, he has also blessed us with the opportunity to do a record without any strings attached. We understand the reasons for us not being on our former label, so I want to make it clear that we aren’t bitter…but it did put us in a markedly different position.

I’ll tell you about the day we found out that we were losing our record contract. I distinctly remember it. We were riding in our van on the way to one of the many concerts we played last year, when Geoff (our singer) received a call telling him that our label was not going to continue our contract beyond Dec. 2010. I’m going to admit, it felt like a punch to the stomach…in sports they refer to it as a “gut check”. Without trying to be cheesy, or cliché, that’s what it felt like. We’d contemplated many times what it might be like to work on the outskirts of the recording industry, and carve our own path. I just don’t think we were quite expecting to be thrust into that position so soon. I’ll tell you, it wasn’t a good day, but since my time in this band, it was probably the most important day of this band’s life. We knew two things for sure that day…1. We still firmly believed that God was still calling us all to this ministry. As long as we believed that this is where God would have us, then we were going to forge ahead. 2. The next record was going to be ours. Nobody was going to steer us away from the vision we had for the next record. We were going to make a Satellites & Sirens record without any strings attached…this was our Jerry Maguire moment, where we could take the band business into our own hands. And so the new adventure began…

With the new year, we started working on what would become our new record. There was really a theme from the beginning of working on the new songs. We wanted it to be “more”. We had visions of it being more rock, more electronic, more of a statement of our faith, as well as it was going to be more personal. We truly believed in our last record, but we believed that the new one, with input from all of our band members and

their varied influences, would ultimately equal a better record from start-to-finish.

In a very short time, we were able to compile roughly 25 songs that we thought were very strong. In the grand scheme of things, that’s not a ton of songs, but we felt very good about all of them…that they all met the “more” mentality both lyrically and musically. We ultimately narrowed it down to about 15 of them that we wanted to track for the record, and from those 15, we would choose 10 for the final record.

Knowing that we had very little money, and a budget that really was bigger than we could afford, we set out to raise the extra money through fundraising. You might ask, how would a band go about that? Funny you should ask…we did it through a website called Kickstarter. If you aren’t already familiar with that website, you should learn more about it. It’s incredible. It allows you to do a fundraiser through the internet, so people from all over the world can donate to your cause. Pretty ingenious. Oh…and yes (yay!!!), we were able to raise enough money to do our record. That being said…

Even with the fundraising we didn’t have a big budget, yet we wanted to make a record that exceeded the recording quality of our first record. We understood that this would really be a challenge, considering that most producers, mix engineers, and mastering engineers of the quality that we desired, are typically very expensive. We decided that our best bet was to pass around a few demos we had made of our new songs and see what a couple producers might think, and whether they could work within our budget. Well…it had to be an act of God that two such producers were excited enough about our new songs that they agreed to help work within the budget we were able to scrap together. Even still, we couldn’t quite afford to have either of them do the whole record, so we decided that since our demos came out so well, that we would have our very own Geoff Hunker produce part of the record as well…

Our intention was to have a 10 song record, but to tell the truth, we really, really loved 12 songs…so we would up with a 12 song record that we believe has met our original vision of being “more”. It’s been a crazy, crazy process, and to tell the whole story might require a short novel….so I might just have to tell more of the story another time. I can definitively say that God’s hand was in the whole process. It really would require a loooong story to tell of all the people who have helped us along the way with this record. If any of you that were involved in this record, from producing, to even donating money to help pay for the record to be done, we owe you a great deal of gratitude. Thank you, from the bottom of our hearts. We couldn’t have done it without you!

The new album is titled “Frequency” and it’s due out in early November. If you give it a listen, I think you’ll enjoy it. We currently have two songs available from the record. Our first single, “Ready to Save” is already on iTunes, and we have another song called “Tell It” available as a free download on noisetrade.com. noisetrade.com/satellitesandsirens

Thanks for reading…and be on the look-out for more blogging from us. We’ll be writing about the road life, about our journeys with God, and our “random stories of domestic life” while we are at home in Nashville. You’ll soon be reading about our recent adventures with spiders. Believe me, you don’t want to miss that one… Additionally, we have started a Tumblr blog that will include pics and videos, etc, etc. You can find it here…http://www.tumblr.com/tumblelog/satsandsirens

“Texas and Transmissions” by Satellites & Sirens

“Enjoy the Ride” by Me In Motion

“Remind Me” by Adam LaVerdiere