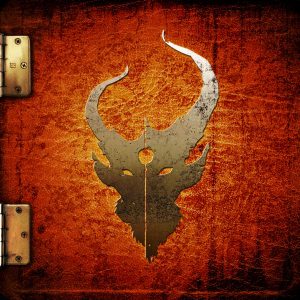 In today’s world, Solid State Records sees a lot of strong bands come through their part of town, but a lot of them seem to fade out after one or two albums (Once Nothing, The Famine, Twelve Gauge Valentine, etc.).  But one band has been going strong for a decade now, and has recently released a monster of a sixth album called True Defiance.  That band is Demon Hunter, and it’s been ten years since we were introduced to them on Solid State.  They started as kind of an enigma with a mystery line-up, though it was rumored (and later confirmed) that Demon Hunter had formed from the remnants of former Solid State group Training For Utopia.

When DH unleashed their self-titled debut, it was an instant attention-grabber.  The album’s biggest single, “Infected,” was a perfect introduction to a sound that would continue to be used album after album, but improved upon constantly: vocalist Ryan Clark screamed his way through the verses accompanied by solid metal guitar riffs and tight drumming.  But oh wait, what’s this?  Singing in the chorus?  Melodies??  It may not have been a completely original idea, but it’s one that Demon Hunter perfected and made into one of their signatures.  Though the metalheads in all of us fell in love with “Infected,” as well as other heavy tracks like “Through the Black,” “Turn Your Back and Run” and “As We Wept,” these same metalheads couldn’t help but fall in love with the seemingly out-of-place (but oh-so-wonderful) rock ballads “My Throat Is An Open Grave” and “The Gauntlet.”  Even with the clean vocals admist a sea of screams and growls, they just seemed right.  Demon Hunter has grown with each new album, and gotten significantly better and tighter (even with several line-up changes), but let’s not forget where they started: with a stellar debut album that people just couldn’t get enough of.

“God’s Got Another Option” by J.M. Farro