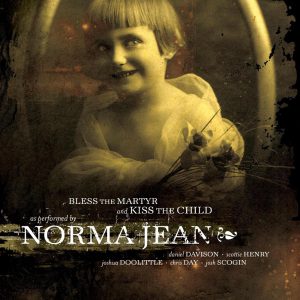 Today’s hardcore fanatics, whether Christian or not, are most likely familiar with (and in love with) both Norma Jean and The Chariot.  Of course, those who have followed the bands since their respective roots know that, before forming The Chariot, vocalist Josh Scogin was the frontman of Norma Jean.  And it was ten years ago that Norma Jean made its first successful impact on the music scene with Bless the Martyr, Kiss the Child.  While quite easily my least favorite Norma Jean album (I’m a late bloomer, so what?), there’s no denying that Bless the Martyr is what began Norma Jean’s rise to fame.  “Face:Face” and “Memphis Will Be Laid To Waste” – more-so the latter – are still requested at Norma Jean shows today, and the current line-up is more than okay with performing those songs.  It’s a testament to the album’s staying power.  If you’re into either band, and you’ve never listened to Bless the Martyr, Kiss the Child, you owe it to yourself as a fan to dig into it.  Don’t let my comment about it being my least favorite album sway you in the other direction.  Go check it out, then go listen to the newest from both Norma Jean and The Chariot (Meridional and One Wing, respectively) and admire the growth that’s taken place over the last decade.

“A Living and Mighty God” by J.M. Farro

“The Power of Positive Speech” by J.M. Farro