Zilch started off as dcTalk’s touring band and featured now widely-known producer Mark Lee Townsend (Relient K, Supertones, and The Wedding) on guitar and lead vocals.  When the guys decided to record their own material, Toby McKeehan was there to help, and released the album on his then three-year-old label, Gotee.  The band’s mix of influences shines through on the mostly alt-rock album.  The band that didn’t really take themselves too seriously named their album Platinum to ensure they had a “platinum release.”  On top of that, they covered “My Hero, Zero” by Schoolhouse Rock! and featured bassist Otto “Sugar Bear” Price as the narrator.  Perhaps the funniest moment on the album is the disclaimer at the end of “Hero Zero” that claimed King David and [Gheorghe] Zamfir would have been good friends because they both played “flute-like instruments”. 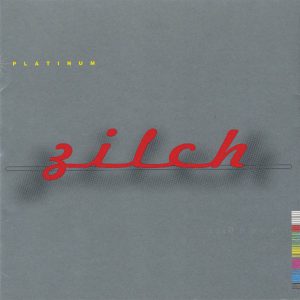 While the band was quick to joke, they also had plenty of seriousness in their lyrics.  They took a look at and responded to a couple of secular hits of their day on “In the Sky” (“One of Us” by Joan Osborne and “Counting Blue Cars” by Dishwalla respectively), which was one if their most spiritual songs and proclaimed God’s presence in our lives by saying, “God’s not in the sky; He’s here with you and I.“

The band replaced Mark Lee Townsend, who stepped down a year after this release, with an unknown singer named Jeff Deyo.  The label encouraged a full-length praise and worship album due to the band’s tendency to play them live.  After some opposition from the band, the eventually embraced the idea and changed their name to SONICFLOOd.  If you’ve ever seen dcTalk live, you’ve probably seen Zilch, or at least part of them.  If you missed this album in the 90s it’s worth a listen today.  It may sound a little dated, but it’s full of goodness.  Do yourself a favor and take a stroll down memory lane.

Our synopsis: “A fun retro pop rock record from dc Talk’s live band. Do yourself a favor and take a stroll down memory lane.” (Recommended by JFH’s Michael Weaver)
Perfect For: Friendship, faith, multiplication, good clean fun
Song Highlights: “Good”, “Everything”, “Hero Zero”, and “In the Sky”

So, what are your thoughts on and experiences with the album Platinum? Do you recommend it? If so, why?

6 Christmas Albums to Check Out from 2020