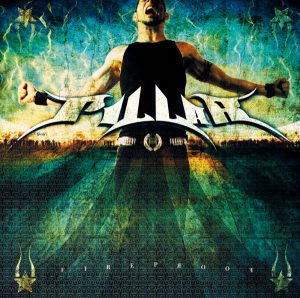 I became a Christian in the year 2000.  Before that, I didn’t know that Christians had their own music.  My favorite band at the time was (don’t judge me) Limp Bizkit.  Yes, rapcore was cool once (honestly, I’d be down for some right now).  As I became introduced to this whole new world of Christian music, one band that caught my ear was a western Kansas band called Pillar.  And this happened: “Wow, these guys are like the Christian Limp Bizkit!”  I’ve since realized that we don’t need that kinda stuff, but at the time, I was new to this thing.

ANYWAY, two years later, Pillar released what is easily their best album: Fireproof.  Who can forget the anthemic chorus of the title track?  “I know where I stand and what’ll happen if you try it, I AM FIREPROOF!”  (Apparently I did, cause I had to look up the lyrics just now)  And how about the repeating of “In God we trust! In God we trust!” in “Indivisible.”  And of course, the album’s ballads were something to write home about; “A Shame” and “Further From Myself” were highlights that made you think and worship in the middle of a rock fest.  Yes, these guys had what my rapcore-loving, new Christian heart longed for.  Fireproof even tied with P.O.D. for most number of weeks for a Christian rock single to be at number one on Christian rock radio (eleven weeks; not sure if that record has been broken since then).  This is also the album that first got Pillar mainstream exposure, with a re-release of Fireproof on Geffen Records and mainstream servicing with their next album, Where Do We Go From Here.  While that album had some good songs and plenty of solid moments, it’s safe to say that Fireproof, while pretty dated by today’s standards, was the best work of their career.  With the band currently on an indefinite hiatus, and lead vocalist Rob Beckley working on a solo project and a new label called idefimusic, it’s unknown whether they’ll ever attempt to best themselves.  But as the band had changed dramatically since Fireproof, I suppose anything is possible!  Go listen to this again for a fun blast from the past.  You know you want to…..right?

“Sign Us Up for Those Pee-Pee TeePee’s! (AKA Spoiler Alert)” by John DiBiase