It’s been a few months since I last wrote, but things have been far from uneventful. Will’s still growing and changing pretty much daily and the things that he says make us laugh all the time. It’s intriguing to note how much we often have to ‘roll with the punches,’ so to speak, and adapt to his changing. Just last night when the three of us were out to eat, he threw a tantrum at our booth in a restaurant and we still are not quite sure what it was about. But once he got his meal and started chowing down, all seemed right with the universe.

But he’s definitely more of a parrot at times now. He’ll surprise us by mimicking (or MOCKING!) things we say. Will is 2 and a half years old now and we’re definitely seeing the development of his personality speeding up. He’s showing signs of imagining when he plays with his trains and other toys – we’ve even caught him sort of joking around. It’s amazing to me.

It’s also funny how one day he’ll be all about one thing and the next day, he’ll be all about another. But lately, one thing he’s consistently obsessed with is – the moon, of all things. There’s a Mickey Mouse Clubhouse episode where they all go into space and it’s really piqued his interest in planets and rockets. It’s kind of funny. [I can’t help but assume he’s going to LOVE Star Wars).

Another thing he’s been doing lately is coming into my office upstairs while Amy is at work and often announcing “Mickey Mickey Mickey!” which means he wants to watch a cartoon with me on my computer. So I’ll prop the little guy on my knee and put a Mickey Mouse cartoon in one pop-up window of iTunes while I work behind it. Today, he asked for Cars while he ate lunch (mini waffles). But before he started eating, he snuggled in with his head against me while watching the movie and I tried to soak it up. It won’t be long before moments like these will be a distant memory… 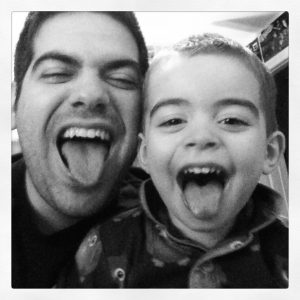 Sitting on my lap at my desk watching cartoons March 17, 2013

“We Have a Crawler!” by John DiBiase

“To Spin or Not to Spin” by John DiBiase