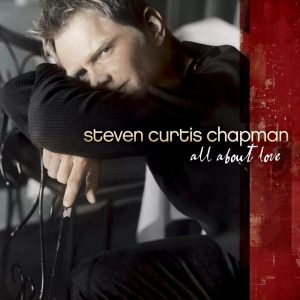 2003 was the year I turned 12 years old. I was just starting to like music, and even then it couldn’t hold my attention for long… unless I REALLY liked it. But thanks to then-recent massive hits like Dive and Live Out Loud, Steven Curtis Chapman was one of those artists I REALLY liked. Granted, I wasn’t that interested in his slower, more serious, or more intimate songs because I was… well… 12. As such, the first time I heard SCC’s 2003 album All About Love, which was an album chock-full songs pertaining to the most serious and intimate subject possible (which, for those that didn’t catch the title, is love), it didn’t pique my interest much. I remember thinking at the time that the album’s only redeeming quality was the opening title track, which reminded me of his other aforementioned hits. And as the years passed and the album continued to collect dust, this remained my opinion of the album. Until I listened to it again about six years later; after a revision and complete overhaul of my opinion, this album can only be described as one of SCC’s best works.

In an award-winning career spanning over a quarter-decade, there are few times that Steven Curtis Chapman has ever been as personal as this (and that is saying something). In its whopping 16-song body (12 originals, two covers, a reinterpretation, and a song from his previous album), Chapman managed to create not only a fully engaging, entertaining, and creative sound, but put them to lyrics that were 100% honest sincerity and 0% cliché-ism or cheesiness (which alone would have been a feat in and of itself). Ever since the day that I picked the album up and listened to it once again, I realized the lasting value and power of these songs.  Love is a timeless topic and Chapman’s music on this album is a timeless collection of sounds, expertly utilizing guitar (both acoustic and electric), piano, orchestrations, keys, and accordions, that still hold up to this day (and undoubtedly will hold up for years to come). For fans of radio hits, it is difficult to beat the title-track in terms of legitimate substance and non-generic music. Those that dig deeper into the tracklisting will uncover such gems as How Do I Love Her?, the intimate We Will Dance, the awe-inspiring Holding a Mystery, the soaring A Moment Made For Worshipping, and even rescuing from the depths the 1988 Proclaimers hit I’m Gonna Be (500 Miles). But to say that there are weaker tracks on the album would be an injustice to its overall quality and thematic cohesiveness.

10 years later now, has Chapman just put out an equally delightful and thematic release in his bluegrass-gospel tinged hymn/acoustic hits album Deep Roots. How do they compare? Well, if you’ll forgive the cliché, it’s like apples to oranges; one is contemporary pop and the other is roots music, and both are geared for specific (and, for the most part, separate) audiences. But if you compare quality, neither can lose any points in that regard. Suffice it to say that Chapman has not lost his ability to put out beautiful thematic experiences in the last decade. But in any event, revisiting All About Love is just as much a treasure now as it was a treat in 2003.

“Life Lessons from a Newborn” by John DiBiase

“Gone, But Not Forgotten” by John DiBiase