Over the weekend, Will got violently ill, waking up in the middle of the night, puking all over his crib. Amy spent most of the next 36 or so hours by his side, even sleeping with him on the couch the next night.

Two nights later, Amy and I were struck with apparently the same sickness at virtually the same time, and we ended up being sidelined for a full day. Thankfully, her parents took Will for almost 2 days so we could recover.

Tonight, Will was back home and slowly recovering from a nap in the car ride home from his grandparents. He was coughing and gagging a lot, but seemed fine for the most part. I was trying to get some work done in my office when a finally smiley Will came running in. 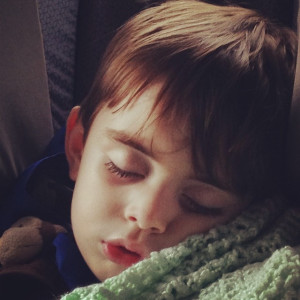 He hops on my desk chair and wants to survey the decorations on my desk. Then he slides down and slurs something about wanting a “Spin ride.”

So I start spinning him in my chair. The sound of a microwave chiming yanks him out of my office and back downstairs, and so I resume working. But before long, I hear the pitter patter of little hands and feet coming back up the stairs. And, before long, he’s wedging himself between me and my keyboard to get me to spin him in my chair.

I hear that little inner voice saying “Someday… Someday you’ll give anything for him to be 3 again and ask to be spun in your chair.”

So I heed the Ghost of Christmas Future’s warning and get up to spin Will in my chair. Except… he seems to never want me to stop. Finally, I tell him to sit tight for one last spin. But this time, when I stopped it, he gags and puts his hand to his mouth.

I had a bad feeling about this.

With sparing you the gory details, he vomited all over my chair (which has a porous “pattern” on a vinyl surface, mind you). As I stand there in shock, not knowing what to do with my puke-covered child or chair, and with Amy otherwise occupied in the bathroom downstairs, I grabbed my son–who’s now complaining about the smell–and dumped him off in the upstairs bathroom where he was about to have a bath anyway, just as Amy was coming up the stairs, and proceeded to try to salvage what I fear is a doomed desk chair.

The moral of the story? Make time for spinning… but maybe call it “enough” one spin earlier. 😉