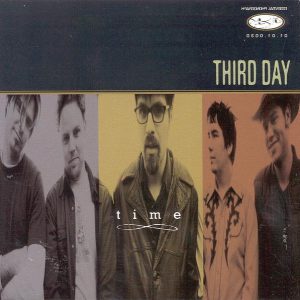 A little personal history first: I wasn’t a fan until I saw Third Day perform live, but this was still in 1996, the year of their self-titled national debut. It was a festival in Hatfield, PA, which also saw the likes of All Star United and 7 Day Jesus performing before Third Day’s headlining set. But after that show, I was officially warmed to Third Day’s southern rock sound, and I made sure to get a copy of the aforementioned debut. The following year, Third Day released Conspiracy No. 5, a decidedly more edgy, raw, rock album that the band admits to being part of somewhat of an identity crisis they’d been experiencing at the time (remember Mac Powell’s bleach blonde hair and thick-rimmed glasses?), but truth be told – it was an awesome album. It also introduced a more directly worshipful mood in a couple of the tracks. All in all, Conspiracy No. 5 was one of my absolute favorite albums for quite some time that year.

But in 1999, the band seemed to know who they were a bit clearer and threw a bit of a curve ball to those who thought they knew Third Day in the form of Time. In hindsight, Time is as much “Third Day” as their self-titled debut. But as they’re not one to make the same album twice, Time was a vastly different album from Conspiracy but far more cleanly produced–and less dated–than their debut. It still holds up really well today, even though the major sound difference from today’s music is that it would have far more strings, synths, autotune and less chord progression so it could be shoehorned onto today’s AC radio waves (Well, that is, if Third Day would regularly fall prey to such practices, which they do not).

“I’ve Always Loved You” opens the album unexpectedly with an acoustic ballad, as opposed to the building anthem “Peace” (which had since become a doctor’s office exam chair prayer/meditation/plea for this guy) from Conspiracy and “Nothing At All” from the debut. The song would go on to become part of many wedding ceremonies (And we put it on a wedding favor compilation CD for ours), but it was a strange way to open a Third Day album. Still, it set the tone for this being a more stripped back album. “Believe” was a rocking follow-up and then “Took My Place” was a sister or cousin to Conspiracy‘s “Have Mercy,” as southern rock tracks that embrace a country twang (maybe a little too much for someone more likely to be found listening to the pop rock of Audio Adrenaline, DC Talk or Newsboys at the time). “Never Bow Down” was another excellent–and sorely underrated–rock track, which was followed up by the undeniably worshipful “Your Love Oh Lord,” which was released on the cusp of the pending worship revolution. It’s heartfelt worship for heartfelt worship’s sake, before worship anthems equalled “surefire radio hit” and the ringing of “cha-ching” in many a label exec’s ears. (Yes, I miss albums like this one.) “Don’t Say Goodbye” is a real acoustic charmer with a classic feel that was just another underrated gem. “What Good” had that soulful Third Day sound and “Can’t Take The Pain” stripped it back with a southern flavor in a similar feel to the way the album began. “Sky Falls Down” picked up where “What Good” left off and then “Give”… well, that is still one of my favorite Third Day songs. It was an epic way to close a relatively modest offering and it just oozed genuine worship.

Now, you can’t talk about Time without mentioning the Southern Tracks EP. It was a collection of 4 b-sides that was packaged in with specially marked copies of Time. Surprisingly, all four songs were gems and could have/should have easily been included as part of Time. Time was only 10 tracks, so these four extras would have put it into NEEDTOBREATHE’s common 14-track territory, but they’re solid songs that play up the southern rock sound that deserved to be a part of the regular album. If you’re lucky enough to have a copy or are able to track one down, you’ll agree these songs stand out.

15 years later and Time is still a great effort. Third Day is still alive and kicking strongly, currently in the thick of making a brand new worship album for an early 2015 release. But Time‘s got its minimalistic moments and a strong southern musical presence, and is a key part of Third Day’s catalog, and one that established some truly memorable fan favorites. Fans of NEEDTOBREATHE and current Third Day should give it a chance still today.

“Is The Light Being Hidden?” by Nathaniel Schexnayder