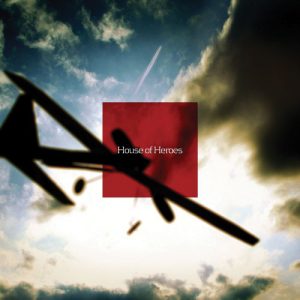 We love House of Heroes here at JFH. Their albums always chart on our Staff Picks and Highlighting Artists, and at one point or another, they have even nabbed the number one spot for both features. They have the first album to receive two five star reviews in JFH history. Additionally, when you click on an ex-reviewer’s name, reason #7 of possible explanations this person is no longer on staff reads, “Didn’t like House of Heroes’ The End Is Not The End album.” (Even if that was listed in jest.) And hey, they seem to like us too, they even performed a special acoustic concert back in 2010 in honor of JFH’s 14th anniversary!

One of the things I respect most about the band is their commitment to their craft. They don’t write records to create radio singles (save “Constant”). Nor do they put out the same album twice. They push themselves, experiment with their sound, and never settle for mediocrity.

While this self-titled album was the first national release from the band, this was not their first exposure to the music scene. In fact, this debut was a long time coming. Journey back to spring of 1996. Young high schoolers Tim Skipper, AJ Babcock, and Nate Rothacker formed a band called Plan B. Two years later, Colin Rigsby–Tim and AJ’s friend from youthgroup–replaced Nate Rothacker as the drummer, and the band became No Tagbacks. The boys released their first and only album under that name in 2001–an under-produced pop/punk record entitled Ten Months. Soon after Tim, AJ, and Colin (all accounted for today) decided to change their name to House of Heroes and shift to a pop/rock sound. The band released their first House of Heroes album What You Want Is Now in 2003 through the independent label Vanishing Point Records. In 2004, the band caught the attention of Gotee Records. After several months of issues with Vanishing Point the band finally signed with Gotee and released this self-titled national debut in April 2005.

I first learned about House Heroes right here as a reader on JFH, from a review by former JFH writer (and now YouTube sensation–thanks to Blimey Cow) Josh Taylor. While first listening to the album, I was impressed with their fresh rock sound, the impressive voice of Tim Skipper—who I have come to regard as one of the best voices in the industry—and unparalleled backing vocals of AJ and Colin.

This album covers a broad range of themes. “Pulling Back the Skin” and “Suicide Baby” talk about broken romantic relationships. “Buckets for Bullet Wounds” provides a voice for social injustice. “Make a Face Like You Mean It (Vampires)” calls out record labels for manipulating artists. “Fast Enough” puts you in the shoes of a woman looking for purpose: “All the lights are on, it comforts no one but your silhouette.” Whatever the message, they pack a lot of emotion into the song, all the while blending creative songwriting with pretty melodies.

HoH finds a unique balance between technical proficiency and casual jamming. They deliver crunchy guitars, gritty baselines, and rhythmic drums with occasional dramatic bursts of energy and emotion. Coupled with the album’s weighty lyrics, the music can pack a pretty significant punch. Despite this, it is a relatively optimistic record as a whole. This is accomplished with minor details like handclaps on “Buckets For Bullet Wounds” and the circus-styled guitar in the bridge of “Friday Night,” as well as bigger picture characteristics like the catchiness of the album and the playful nature of how the drums, guitars, and bass work off each other.

One of the album highlights, “Friday Night,” starts off slow, but it isn’t long before it shifts to an upbeat rock number. In the second verse, Tim passes the vocal reins to AJ Babcock while he sings “the record keeps on spinning” and plenty of “oh’s” in the background. Hearing AJ so prominently here–and on other parts of the record–is a real treat, especially because of its rarity on following records. The most powerful song on the album is the lead single, “Serial Sleepers.” This song and its accompanying music video serve as a wakeup call to those have become apathetic in their faith. It’s one of the few spiritual moments on the album: “rise up, O Sons of God, and sing the song that hides behind your teeth.“

While the majority of this album was new material, “Mercedes Baby” and “Kamikaze Baby” (renamed “Suicide Baby”) were both re-recorded from What We Want Is Now: “Mercedes Baby” is a fun upbeat rock number with a thick baseline and a catchy chorus. I’ve heard many fans say they prefer the raw emotion of the original, but personally, I find this version tighter and more suited for the encouraging message. But man, that is one killer breakdown in the original. “Suicide Baby” is a significant improvement from the original, especially in the vocal department. This song also has a memorable chorus but is a more laid back in the verses.

Closing out the album, “Angels In Tophats” is an emotional song about a boy and a girl who got into a car wreck. The girl is in the hospital while the boy is pleading and praying for the girl to wake from her coma. This nine-minute roller coaster ride requires complete focus to fully appreciate, but those with the attention span to sit through it will vouch for their ability to capture a story with songwriting and music–something they mastered in The End Is Not The End.

Overall, this is a solid rock album. Many recent fans discovering this gem for the first time may find it different from their more polished successors, but multiple listens would reveal that this is the same clever and talented band. It’s not necessarily a masterpiece like the band’s magnum opus The End Is Not The End, but it holds up well to Suburba and Cold Hard Want. One important note is that Mono Vs. Stereo (Gotee’s sister label) re-released this album as Say No More in 2006, introducing two new songs into the mix: “You Are The Judas of the Cheerleading Squad” and “Invisible Hook.” They are both fantastic songs and though they don’t quite fit with the original tracklist, it works well enough to make the purchase a little more valuable.

Today, the band is independent and working on their first “true” concept album. The record is being funded by a $50,000+ IndieGoGo Campaign (which was 160% of their $35,000 goal). During the campaign, the band released the stellar six song Smoke EP. Since then, we have been treated to the Hark! The House of Heroes Sing Christmas EP and have also been promised an acoustic EP this spring. As a “Member of the House,” I’ve had the pleasure of seeing the early development of this concept album and judging from the jam sessions and story ideas we have heard so far, it will be well worth the wait. I’d love to tell all you wonderful JFH readers more details about the record, but I think we have to keep things confidential. But I think I’d be okay to share a still shot from one of their jam sessions in AJ’s mom’s basement. Here’s to another 10 years for the beloved rock band, House of Heroes.

We Recommend: Future Of Forestry, “Twilight”

“The Problem with Pampering” by J.M. Farro

“Flashback: This Really was My Last Meal.” by Amy DiBiase