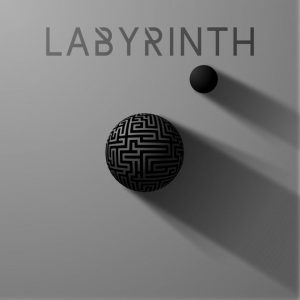 I teach rhetoric to high school students. Whenever there’s confusion about evidence or arguments (and there’s a lot these days), I always take it back to the text. Analyzing, paraphrasing, and interpreting are all great skills, but nothing cuts through the mire quite like quoting verbatim from the source. I think the same can be said of the Bible. There are nearly infinite interpretations and analyses that have accumulated over centuries, but it all comes back to the source.

Labyrinth takes it back to the text, utilizing verbatim scripture to craft musical meditations that cut through the mire. Labyrinth is not an interpretation; it’s a conversation.

It’s a conversation between the past and the present, the ancient and the modern.

It’s a trans-generational conversation between father and son, a new musical translation of scripture.

It’s an inter-personal conversation between who I was and who I am, when I was stuck in the depths of the labyrinth and when I found the Ariadnean thread that led me to the light.

It’s a multi-lingual musical conversation. Many of the songs are inspired by classical composers like Satie, Ravel, and Debussy, but incorporate modern orchestration –– kind of like if Beethoven and Lauren Daigle had twins and gave them synthesizers and miscellaneous brass instruments as play toys.

It’s an inter-scriptural conversation between translations written across millennia. For example, in “Come To Me,” Proverbs 3:24 dialogues with Matthew 11:28 in over six different translations. In “My Help Comes From The Lord,” Isaiah 41:10 communes with Psalm 121:1-2. In “The Peace of God,” Philippians 4:7 converses with Proverbs 3:6.

It’s a dialogue about rituals and symbols, exhuming ancient practices and reexamining their relevance and power. Labyrinths were placed outside medieval cathedrals to provide passage from the outer world to the inner sanctum, from the profane to the sacred. They were also placed on the flyleaves of ancient manuscripts to symbolize entry into scripture, to be the gateway into the biblical text. Historically, the Labyrinth was intended as a reminder, the symbolic manifestation of God’s command to Moses, “Remove the sandals from your feet, for the place on which you are standing is holy ground.”

This project seeks to do the same, to remind listeners of the terrifying and fascinating power of God, to journey through a sonic labyrinth to the depths of one’s soul, to bring comfort during times of chaos, to prepare our hearts and minds, as if to say, “pay attention – we’re headed for a deeper dimension.”

“Performing for God” by Jarrod Jones

The NEW Album And Mission Of Rusty Shipp! by Russ T. Shipp