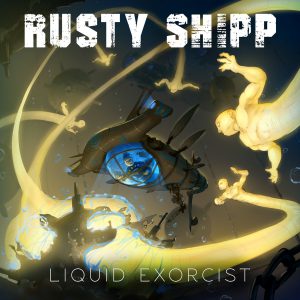 Back in April, I (Russ T. Shipp) went on my annual retreat to a monastery, but unlike years before when I retreated in pursuit of realigning myself with my life’s purpose, this year I had a new objective: create the concept for a musical project that was more ambitious and creative than “Mortal Ghost.” This goal was made more challenging by the fact that my band Rusty Shipp’s previous release, “Mortal Ghost,” had just been named #2 album of 2017 in all Christian music by Jesusfreakhideout.com and then went on to win the award for Album Of The Year in the 2018 JFH Awards, among other prestigious accolades. But after 3 days of silent meditation, writing every Nautical Rock ‘n’ Roll idea I could muster, it was in the very last hour before I had to go back to Nashville that the concept I was looking for suddenly struck me:
“Liquid Exorcist.”

To live up to the goal of making something more ambitious and creative than our last album, we decided to make our first full-on concept record with all the tracks painting a picture of a chronological story. The story of Liquid Exorcist follows an evil organization that has laced the ocean with a hundred sea mines, causing war with their enemies and innocent sea-dwellers alike. Long after the war, some mines remain adrift in the ocean awaiting collision with innocent passersby.

This underwater setting of the story is where the term “liquid” comes into play, and the sea mines are like a kind of “exorcist”–explosively casting out the spirits of anyone who collides with them. This metaphor of “exorcism,” i.e., the casting out of a spirit from the body, is a theme that appears in every song on this record, reflecting the different experiences of the souls affected by this marine warfare.

For this new EP we’re really drawing out the ingredients of our staple “Nautical Rock ‘n’ Roll” sound in bold and experimental ways to tell the story of Liquid Exorcist. While progressing the sounds of this new genre, we’re also channeling our roots to give homage to our collective influences, such as doing a Chris Cornell tribute song and songs that are an obvious nod to 60’s surf rock, prog rock, and Nirvana-esque grunge pop.

Since we’re an independent band without a record label we’ll need to cover all the recording costs ourselves, so we’re giving people the option of preordering the record and some special, exclusive merch in an attempt to fund the recording expenses. We’re selling things like band equipment, exclusive t-shirts and stickers, hand-written lyrics, a Skype session with the band, a video of us performing ANY song of your choice, and also the opportunity for us to come play a private show for you! ALSO, everyone who contributes ANY amount will immediately get a private link to our brand new music video that has not yet been released to the public! There’s less than a week left to preorder from our Indiegogo page HERE: https://goo.gl/ox3PPN.

We in Rusty Shipp want to give a huge THANK YOU to all the staff and followers of Jesusfreakhideout.com, who single-handedly catapulted our music onto the global stage! After becoming the first independent artist to ever win Artist of the Year and Album of the Year in the JFH Awards, many doors of opportunity have been opened to us and continue opening to this day! Even last week I (Russ T.) had one of the greatest experiences of my life when I was invited by my favorite singer, Kevin Max from dc Talk (who we barely beat out for Artist of the Year, I might add!), to be the only guest vocalist at his annual Christmas concert and sing a duet with him!  Amazing, providential things are happening almost daily for us and we’re excited to experience them with all of you!

THANK YOU SO MUCH FOR SUPPORTING, SHARING, AND ENJOYING OUR MUSIC! YOU MAKE THESE SEAS WORTH SAILING ON!

*The guys talking about their new project*

“This Is Why We Do It” by Satellites & Sirens