Sixpence None The Richer should get an award—if you know their story at all, you know it was one fraught with delay and frustration. They were (are?) a supremely talented band with poetic lyrics, the angelic voice of Leigh Nash, fantastic guitar work, and the right amount of melancholy. For me, they belong in the upper echelon of artists like Jars of Clay, Switchfoot, Dctalk, Relient K, PFR, and Caedmon’s Call, as a favorite of the genre.

When compiling and listening through their discography lately I fully enjoyed myself, though I did struggle to rank a very strong catalogue. After much vacillation and many late night listens, this is where I landed. Hope you enjoy the read, and even if you disagree, I think we can agree this is a band worth listening to. Be on the lookout for a playlist at the end of the blog. Lastly, in case you missed it, check out these other Artists that I have ranked in previous posts (Scroll to the bottom for the links). 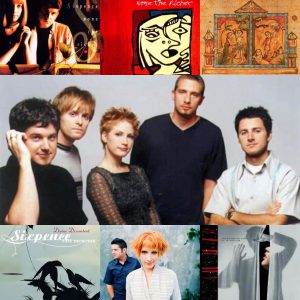 “I Just Wasnt Made For These Times”

On to the countdown!

Chilling. I’m fairly certain I like this U2 cover better than the original too…sorry fellas.

At first acoustic and then joined by a chimey lead guitar, this is typical Sixpence thoughtful lyrics juxtaposed with a sunny melody.

A plodding bass line gives way to a sauntering chorus held up by an organ melody line.

“They’re looking for money as they clean my artistic wound.” Yikes. Artistry and profitability collide. Hooky chorus makes for a tune that sticks with you long after the last guitar chime.

A rare playful and coy tune for the predominately serious group.

The first in a trio of excellent tone-setting songs that kick off their Self-Titled, it’s really best listened to immediately followed by “Anything” and “Waiting Room.”

The opener for the much rawer and rocking album This Beautiful Mess, “Angeltread” explodes at the 2:00 mark with a fury and passion you may not know the band was capable of if their radio singles are your only exposure to their work.

Great song on a good compilation, inspired by an awesome book by Bob Briner.

More of the drop-dead gorgeous strings that the entire has coursing through it, “Waiting Room” finishes the trilogy of songs leading off the album before giving way to a certain pop tune you may have heard…

The piano line in this one coupled with the string sections draws me in right from note one. Stick around for a beautiful tension in the bridge before settling back into the flowing melody.

I really enjoy the guitar work from Slocum on this one. Tone. Solo. Delay pedal, all of it. Well done.

Quiet then loud dynamics helps make this one a standout and great closer.

Something about the aching sadness brought on by the violin just speaks to me in this one.

A true mixture of their styles combining the driving rock edge with some ambient guitar tones and Leigh’s angelic voice. It all swirls together in a messy chaotic way with crisp drum accents making for a solid standalone tune that also works well in the context of the songs before it on the album.

The bass propels the song forward at a near breakneck speed for the entirety of runtime giving no time to breathe until the end.

Another in a long line of terrific tunes from their s/t album…is that a brass instrument in there? C’mon! Listen to the weariness of these lyrics…

“This is the last song that I write/’Til you tell me otherwise/And it’s because I just don’t feel it anymore/It should be our time. this fertile youth’s black soil is ready for rain/The harvest is nigh, but the well has gone dry.”

I’ve always loved the guitar riff in this one and hoped they would make another pass at a riffy, upbeat tune…don’t think they ever quite captured it like this again.

A lesser known B-side doesn’t mean this isn’t a high-quality tune In fact, this rockier side of Sixpence works quite well. While SNTR can do chill and beautiful as well as any band, their versatility shines when they roll up their sleeves and cut loose as they do here.

The B-side of the single “Don’t Dream It’s Over.” This is a stone-cold rocker. It’s a shame it never made it on one of their full albums.

A Gorgeous floating melody I could listen to on repeat. In fact, I think I will!

Look next to pop earworm in the dictionary and you find this song listed. No wait…don’t actually do it, I’m just kidding…who still has an actual dictionary anyway? Anyway, it’s a great song, but it would be a shame if that’s all you thought the band was. This is an outlier in their catalogue, though a good one. Over 400 million streams of this one.

The acoustic guitar reminds of another favorite band and even takes the kind of left-turn musically they would also employ in their career. Upbeat and practically joyous.

Lots of great memories listening to this worshipful song on one of my favorite compilation albums.

Hard to top the aggressive guitars, the angst, and then the soaring vocals above it all— so it sits atop the heap.

Whew! What a great body of work from a band that no one would have blamed for giving up with all the red tape and label woes within their career. I for one am glad that they persisted to give us a cadre of fine material to return to, often on the rainy days. Melancholy yes, but never without hope—Sixpence None the Richer ranks right up there among my favorite bands of all-time.

Here’s a playlist of all but the ones not available on Spotify (plus a few honorable mentions) if you care to listen along. 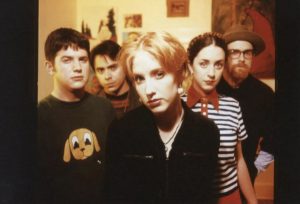 “Rewards for the Good We Do” by J.M. Farro