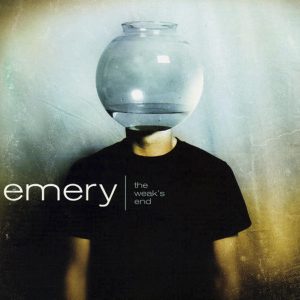 Several years ago, I was all about watching TVU. My church had it playing in its game room, and whenever I went in there, I sat and watched video after video. In 2004, a new band had one of its videos playing, and from the opening screams of “Walls,” I knew Emery was something special. Since then, they have consistenly put out amazing music, and are set to release another great album next month. But in this guy’s humble opinion, it may be very hard to top their debut, The Weak’s End. Mind-boggling as it is to me, it got the lowest rating on JFH out of all their releases, but it’s my personal favorite of the discography. Songs like “The Ponytail Parade” and “As Your Voice Fades” are some of the finest emocore you can find. The Question and I’m Only A Man are definitely really good albums, but if you enjoy screaming amidst some passionate emo music, buy The Weak’s End. It’s a must-have. – Scott Fryberger

Our synopsis: “The debut album from one of the most passionate and skilled emocore artists in the entire market today.” (Recommended by JFH’s Scott Fryberger)
Perfect For: Troubled relationships, emotions
Song Highlights: “Walls,” “The Ponytail Parade,” “Disguising Mistakes With Goodbyes,” “Fractions,” “As Your Voice Fades”

So, what are your thoughts on and experiences with the album The Weak’s End? Do you recommend it? If so, why?