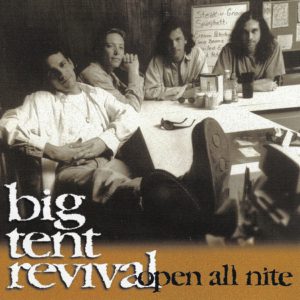 My dad is about as blue collar a guy as you’re likely to meet. As a fisherman in Maine, he has owned almost twenty different pickup trucks in my life time (and surely many more before I was born) and a wardrobe made up of ten pairs of jeans and ten flannel shirts. He has one or two pairs of “fancy clothes” for going to church in and comes home at the end of the day and collapses into his favorite chair.

I knew when I first heard Big Tent Revival‘s Open All Nite that it would be the kind of album that he would dig, and I was right. I bought it for him as a Christmas gift and it didn’t leave his truck’s CD player for years. (I suspect it was still in the stereo when he traded his truck in for a new one.) He would blast it for anyone who was riding with him that day and talk about the songs as a way to introduce people to Jesus. When I was home from college on summer break, I always knew when he was coming home from work because I would hear those songs coming over the hill as he drove home with the windows down and the radio cranked up to unreasonable levels.

It’s great when a gift you give really delivers, and I knew when I heard Open All Nite‘s opening track “Mend Me” that it would speak to guys like my dad. He is far from perfect and sometimes would feel like folks in our church who looked and acted more respectable had it all together while he struggled to reflect Jesus. When lead singer Steve Wiggins offers up a stark confession that, although the singer stands on a stage in front of you (seeming like someone who has it all together because he has been given a microphone), “he can’t escape this life of sin.” Like the Apostle Paul “what I want to do I don’t do, what I do I don’t want to do”, and finally the honest (and throat shredding) confession “I am broken, mend me.”

Songs like “Here With Me” “The Best Thing” and “Famine Or Feast” rock with abandon and sound great in a pick-up truck, but also manage the neat trick of speaking to the everyday trials people go through without talking down or at their audience. Wiggins and company testify to how God works in the everyday against a great rock and roll backdrop that echoes classic rock albums by Bruce Springsteen and The Eagles.

A few years later I got Big Tent’s follow-up album Amplifier for my dad’s birthday and he lit up with a huge smile when he opened his present. At last! New music for the pickup truck!
– Alex Caldwell

Our synopsis: “A classic late 90s southern pop rock record that still remains the best in Big Tent Revival’s catalog…and it still sounds great today!” (Recommended by JFH’s Alex “Tincan” Caldwell)
Perfect For: Encouragement on a tough day when the bills are due, or riding in a pickup truck
Song Highlights: “Mend Me”, “The Best Thing In Life”, “Here With Me”, “Famine Or Feast”

So, what are your thoughts on and experiences with the album Open All Nite? Do you recommend it? If so, why?

“Why Can’t They All Just Say It?” by Matt Johnson

We Recommend: Showbread, “Age Of Reptiles”