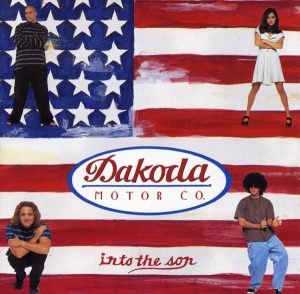 Tonight, I sat down at my desk and got the sudden impulse to listen to one particular record. As I sat here wondering what the latest recommendation from us should be, it quickly became obvious.

The funny thing about Dakoda Motor Co. and their 1993 Myrrh/Word debut Into The Son, is that when I first saw the music video for “Grey Clouds,” as a teenager, I hated it! It’s funny to think that, before long, not only did their sound – and that song – grow on me, but they remain, to this day, one of my favorite listens. Into The Son is a raw surf rock record (classic “Jesus music” as some might say) when the California band was at its peak. Davia Vallesillo‘s vocals (and Chuck King’s frenetic and varied drumming) are really what stand out on this record. While the band’s message got more diluted over the years as guitarist Peter King suited up as an MTV video jock, DMC was never the same, but this debut still sounds great 16 years later (although the sophomore album, Welcome Race Fans has a few genuine gems). With the original lineup currently reunited and performing a few spot dates here and there, the hope for new tunes from this band begins to rise again… – John DiBiase

So, what are your thoughts on and experiences with the album Into The Son? Do you recommend it? If so, why?

“Flasback: Off to the Hospital. First Triage?” by Amy DiBiase