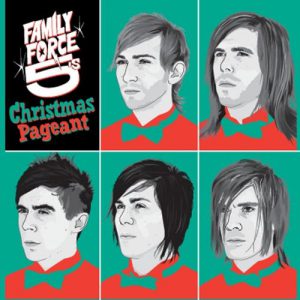 All year long, we had been hearing rumors (and subsequently confirmations and details) about a Family Force 5 Christmas album.  Well, back in October (kinda early, but whatever), we were treated to their take on Christmas songs, as well as a couple of their own that they wrote for the album.  The boys did Christmas as they do everything – however they want (such as a gangsta version of “Carol of the Bells” and giving the “Little Drummer Boy” a drum machine).  But they also throw in a traditional style Christmas pop song with “It’s Christmas Day,” which also incorporates a family vibe by having the Olds brothers’ father, Jerome Olds, provide some vocals as well.  My personal favorite from this project would probably be the FF5 original, “The Baby,” a dirty south quasi-hip hop song about the three wise men going to visit the baby Jesus in the manger.  Family Force 5’s Christmas Pageant isn’t the best Christmas project I’ve ever heard, but it’s a fun and fresh take on some Christmas jams (and “My Favorite Things” from The Sound of Music?), and it’ll most likely go down as one of the most original or creative Christmas albums ever made. – Scott Fryberger

Our synopsis: “Somewhat of a solution to our desire for a gangsta Christmas.” (Recommended by JFH’s Scott Fryberger)
Perfect For: Christmas cheer and light-hearted fun
Song Highlights: “Carol of the Bells,” “Little Drummer Boy,” “My Favorite Things,” “Angels We Have Heard on High,” “It’s Christmas Day,” “The Baby”

So, what are your thoughts on and experiences with the album It’s Family Force 5’s Christmas Pageant ? Do you recommend it? If so, why?

“When Your Heart Needs A Song…” by John DiBiase