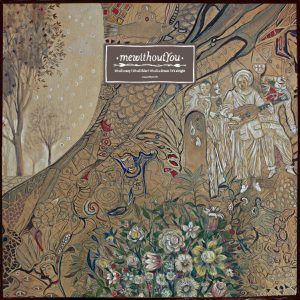 I have decided that mewithoutYou are musical geniuses.  I understand that not everyone likes their music, and I can accept that.  I can’t understand or accept when people say that they aren’t good.  mewithoutYou is good.  VERY good.  It’s All Crazy!… turned a lot of people off, but I can’t get enough of it.  This is a brilliant piece of work.  Sure, it doesn’t sound like Brother, Sister, but so what?  The music is as experimental as it’s ever been for this band, and the lyrics are no less passionate or thought-provoking (and way more spiritual).  “The King Beetle on a Coconut Estate” is a gorgeous waltz-turned-orchestra-turned-rock song that explores the mystery of God and serves as one of the best songs on the album.  “The Angel of Death Came To David’s Room” re-enacts a possible dialogue between King David and the angel of death when he comes to take David away, “Cattail Down” is a traditional mewithoutYou-style jam that reminisces on singer Aaron Weiss’ days of traveling and train-jumping, and “Fig With A Bellyache” discusses living in sexual sin (in more risque terms than some would like to hear – though it’s not terrible).  And everything that Weiss speaks of is wrapped up in a nice little package of breathtaking guitars, drums, mandolin, keyboards, and lots of other instruments pieced in here and there (“The Fox, the Crow and the Cookie” has some tuba and oddly-played violins or violas).  It’s a great album, and though it’s hard to compete with Brother, Sister, It’s All Crazy! definitely has its place as one of the great albums of our time. – Scott Fryberger

Our synopsis: “Beautiful, thought-provoking, intelligent, a masterpiece.  End of story.” (Recommended by JFH’s Scott Fryberger)
Perfect For: Insight, humility, submission
Song Highlights: “Every Thought A Thought of You,” “The Fox, the Crow and the Cookie,” “A Stick, A Carrot and String,” “Bullet To Binary, pt. II,” “Timothy Hay,” “The King Beetle on a Coconut Estate,” “Allah, Allah, Allah”

So, what are your thoughts on and experiences with the album It’s All Crazy! It’s All False! It’s All a Dream! It’s Alright? Do you recommend it? If so, why?

“Attack of the Tickle-Toes Duck” by John DiBiase

Ten of Michael Weaver’s Top Favorite Songs of All Time