Sometimes being on tour brings about tragedies and uncontrollable laughter.  They seem on the surface like they could never be involved together in the same incident.  Well, ladies and gentleman, we managed to live through such an incident this last week.  It provided both the most fear and the most humor that any of us have endured yet on tour.  The story goes as follows….

It seemed like an innocent enough turn onto such an unsuspecting road.  We were only on said road for about a 1/4 mile when we realized that we had turned the wrong direction.  Thanks to our sometimesunreliable GPS (aptly named Hannah), we were headed in the wrong direction.  We went ahead and drove until we found a place that had enough space for us to turn around our van and trailer.  We found such a place and headed back in the direction we were supposed to be going (we’re looking at you Hannah).  As we’re cruising along at a leisurely, and legal pace of 30mph, we see our destination in the distance…how could Hannah have been so wrong?  Just as we were all talking about how close we were………we were suddenly airborn!!!  That’s completely off the pavement folks, in a full-size van and trailer, no less.  We didn’t see it coming at all.  It was the most unassuming intersection you’ve ever seen, but apparently it has the BIGGEST dip in all of the United States, because it sent us completely airborn.It was the craziest feeling, realizing that somehow we were flying through the air (cue up image of Harry and his dog van flying through the air in “Dumb and Dumber”).  When we landed, we all started screaming like little girls, and were laughing hysterically.  Only then did Jonathan look back and realize that our trailer was now somehow pointed directly towards the ground, rather than riding horizontally to the ground.  Problem, big problem.  That brought the laughter to a halt very quickly.  So, we pulled over to the side of the road to inspect what we figured was just an unhitched trailer, only to find that it

wasn’t unhitched at all.  As it turns out, it was still hitched, but the metal piece that hitches to the trailer was completely bent (see picture below).  Our trailer was basically dragging on the ground.  Now picture the four of us surveying the damage, and looking at each other amazed…and then bursting into laughter yet again.  How in the world did that whole scene just happen?  Our trailer is not only busted in Dodge City, Kansas, but only a quarter mile from our destination!  What are we going to do for the rest of the tour?!?! Despite the busted nature of the trailer, we did manage to limp our way along to the church.  As we pulled in, we were immediately spotted by other band members, crew members, and church volunteers alike…and more uncontrollable laughter ensued…  When out of nowhere the youth pastor walks up and says, “Oh, I can take that to my parents farm and have that fixed up better than new, and I’ll have it back to you within a couple hours.”  Of course we accepted, and sure enough, two hours later it was back to us fixed up better than new.  Apparently, it can now handle more moments of being completely airborn, and it’ll likely be able to handle the trauma.  We are now indebted to you Dodge City, Kansas and Dodge City Church of the Nazarene.  You have a place in our hearts for as long as we live, because this story is going to live on and be spoken about for generations to come 🙂

Besides that amazing story, I have a challenge for you guys out in Jesus Freak Hideout land.  I was reading in Ephesians and I found a verse that I feel needs to be applied more and more in our lives.  Eph. 4:29 Do not let any unwholesome talk come out of your mouths, but only what is helpful for building others up according to their eeds, that it may benefit those who listen.  Why is it so much easier to cut each other down, rather than encourage each other?  I know it’s easy to poke fun rather than build each other up.  But what if we started making a choice to build each other up instead of poking fun?  Granted, sometimes a little ribbing is in order…but why is it so difficult to tell someone how much you appreciate them and their gifts?  Let’s make it a challenge, both for you, and for me, to be an encouragement for those around us, even when we don’t feel like it. We all deserve to be built up not only in our walk with God, but in our relationships with each other. We love you guys, and if any of you get a chance to come out to the Blood, Sweat and Rock ‘n Roll tour with us, Disciple and Decyfer Down, make sure you come and say “hi” to us.  We’d love to chat:) 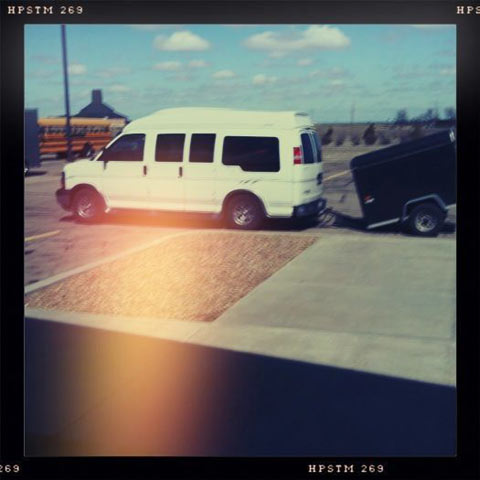 Our sad trailer before she was fixed by the amazing folks of Dodge City, Kansas….

“Reflecting A Holy God” by Here Be Lions

“Innocence In The Music Industry” by Chris Sligh

“Music as Privilege,” by Mark Nicks of Cool Hand Luke