If I might be completely honest, if you were to ask me if I would like to have children or would like to continue as just a duo with Amy for now (or trio if you count our darling guinea pig – and resident glutton – Indy), I would have to say that I would rather remain a duo… for now, at least. However, that “for now” hasn’t budged for the almost-seven years of our marriage, so here we are! But the truth is, many many things about parenthood… well… scare me. Perhaps it’s simply the unknown of it all… “What will it be like, ultimately? Will I be a good father? Will I like being a father? What will the kid’s interests be? Will they be good?? Will they like me?? Will they listen to me?? Will they love Jesus??? Will they think I’m a dork????” … and while the last one bears an obvious answer (spoiler – it’s “Yes.”), and I could go on and on and on with more questions than this website can hold – or readers could bear – I realize this is where the trust in God comes into play. Something I feel like I’m always being tested in and taught.

Tonight, Amy and I went to the mall so I could show her a hoodie that I thought would make a great maternity covering… or what I would like to call… a “Maternoodie!” 😉 On the way home, we made a semi-routine stop at Wal-Mart (I wanted an organizer for what will be the little one’s bedroom closet… but, uh… errr… for my stuff). Amy decided it was a good opportunity to get some baby clothes and gifts for a close, longtime friend who just gave birth about a week or so ago (Amy mentioned it in her recent blog), and I found myself in the middle of the superstore gazing at rows of pastel-colored items. Normally I try to avoid such store departments, but the overwhelming feeling that, “Yeah, Junior, you’re gonna be shopping here REEEAL soon!” came over me. I literally felt a stroke of anxiety and partly found that realization (that this caused anxiety) amusing. As I calmly fled the department, I found myself in other areas of the store – ones I usually peruse, like toys of course – and kept looking at items through the lens of pending parenthood. Naturally, that didn’t help my condition. When I rejoined Amy, I probably muttered something like “I’m really not ready for this!” before asking her to check my pulse (for the mild anxiety attack). 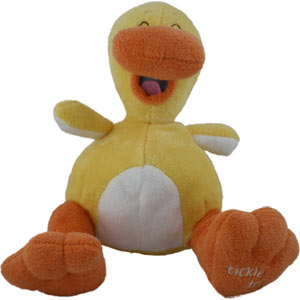 Obviously, whatever we will do and go through – which we’ll do together – I will be able to handle (Attaboy, John! Think POSITIVE!). For some bizarre reason, against my very will, I’m finding myself in a season – not too unlike something out of the Twilight Zone – that I honestly probably never truly visualized for myself. And as I attempt to “prepare” myself as best I can, I’m finding my mind on sensory overload. It didn’t help that my eyes fell upon a fantastically deranged plush duckling that looked as though it may have literally died laughing (the image below does NOT do it justice). While the small Precious Moments prayer bear that plays a little child’s prayer when you squeeze it was admittedly rather heartwarming, this freakish yellow thing dispelled any good feelings. And to make matters worse, when you squeezed his left foot that bears the words “Tickle Toes”, the sound of a CHILD’s tickle laughter comes out of this PLUSH DUCK….. I just don’t understand the baby world. Perhaps it’s because I’m almost 30 years removed from when I once was a baby (although I do still have my first stuffed bear – Big Bear – thankyouverymuch!), but it’s this whole community, an almost intergalactic universe that seems so foreign to me. It’s almost like I’m about to head overseas to a strange land where only women seem to know the language over there. How does one prepare for such a thing?!

As I get ready to close this day and jump start a new cycle of hours that will bring me ever closer to the welcoming of a third person into our modest band of DiBiase’s, I will leave you with those scattered thoughts… and this, a creepy duck who looks as though he died while choking on a teething ring.