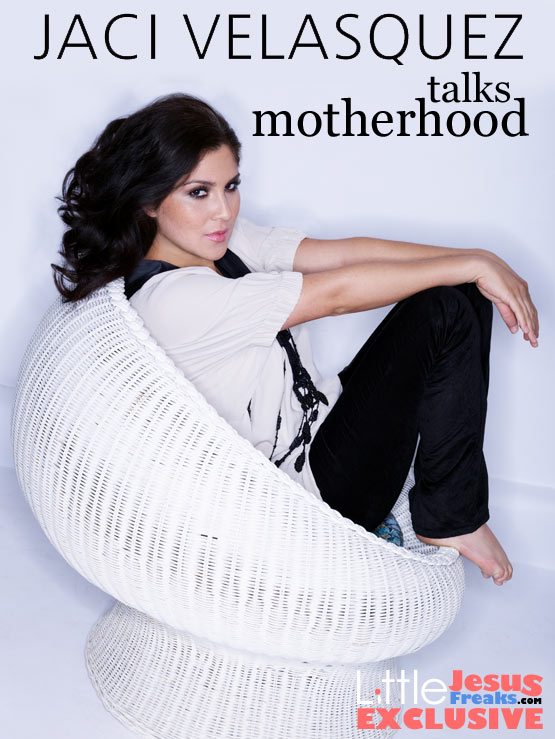 Jaci Velasquez: Well, raising Zealand. And getting pregnant again and then having Soren, my youngest. And then we recently finally got the writing and production and new tracks going. So that’s happening, and those are gonna be finished [soon]. We’re doing a live DVD recording in June and simultaneously we are recording the record at the same time. So the songs and everything are ready to go, but now we are doing the DVD and that’s actually going to come out before the record, so it’ll be something different. And I’ve never done a DVD and Nic [Gonzales] has. So it’ll be my first time, so I’m very excited! And then I have two movies coming out. Those will be out in 2011. One is called The Encounter and the other’s called Countdown To Jerusalem. And then, I’m actually working on a book right now and it’s called Coffee and Concealer and it’s basically the adventures of motherhood and all the things that brought me up to be ready to this point. It’s basically a survival guide!

Jaci: Thank you! It starts off with – I think the first words are: “This is a story, although it may sound fiction, it’s actually not. There was a time when drinking coffee was done out of leisure and pure enjoyment. Now it’s done for survival. Wearing make-up was there to enhance what God gave me, make me look pretty. Now it’s done so I don’t look like, ‘Hi, my name is Jaci and I’m a character straight out of the Night of the Living Dead.’” Like today, even my eyes are bloodshot. We didn’t get much sleep last night, between my husband and the baby being sick, it’s not good. But everyday’s a new adventure, though! And it’s okay. I don’t mind. I don’t mind going without sleep. I had twenty seven years to sleep in and I slept well during those twenty seven years! Now I am thirty and I’m going, “OK… this is good. This is easy. I can handle this.” But it’s fun! It is a lot of work, but it’s the most rewarding and you’ll have moments, possibly, when you’ll feel unappreciated that you put on yourself, but it’s not unappreciated. They’re not old enough to tell you some things yet. They don’t get it. You’re “mommy” and you’re there for them and not for yourself anymore. And it really does teach you a lot about selflessness, patience, and just being happy making things work. And simplify. I’ve learned to simplify things. I don’t carry a purse anymore. I carry a diaper bag – which has my wallet and has my phone and that’s all I need! *laughs* No time for make-up touch-ups!

Jaci: Ohhh! That is SO cute! Do you know what [you’re having] yet?

Jaci: Y’know, every baby’s different. You can ready as many books as you want… I read Baby Whisperer for Zealand. Didn’t work. *laughter* Didn’t work on him! He was just not having it. And then Soren was born and didn’t nap well during the day, but at night he slept like a CHAMP! But Zealand didn’t. But Zealand was an easy baby during the day! Very quiet. Very compliant. Still, to this day, he’s a compliant child. And very quiet still. While Soren is always *does Soren’s baby talk impressions* Everything is “Wa wa.” And he’s not a compliant child. He has a mind of his own. And he’s like “I have no secrets, I’ll tell you what I think and how I feel and you’re going to hear about it! I don’t care what you think.” He’s just like that! He’s strong! And he’s also an athlete. And my eldest is a musician. He’s really cool. And he’ll see a pretty girl and he’s like *Makes a flirtatious face*

Jaci: …That is Nic. *laughter* Soren does the same thing!

Jaci: *laughs* I know… I know. It’s good though. It’s easy. It’s easy once you get past that first month and you get the hang of it. Nobody tells you… The first month is really hard. And it almost feels like when you’re in your house and you have that baby in there, it almost feels like there’s nothing there outside of your house. It feels like: *said nervously* “All I do is feed… Change… He sleeps… And then I feed… And then I change! He sleeps!” *laughs* That’s all. And it feels like that at first. And then it’s easy. Because then you get a rhythm, and then you’re not scared to take him outside. With your first child, you’re like “I’m not gonna do this! I’m not gonna feed him this! I’m not gonna that!” And I was full-on. I made organic everything. I made his food! And then the second one came along… His goldfish would fall on the floor and I’d be like “OK, here you go baby” *makes a motion of picking up something and handing it to Soren… followed by laughter* I’m like – he crawls, he puts his hands all over the floor! *laughs* You totally change! Ugh! It’s crazy.

Jaci: How far apart are you?

Jaci: OK. See, my kids are 15 months apart. I mean, you’re gonna be fine, then! You’ll know how to do it. The first night you go home with the baby, it kinda feels weird, because you’re in the hospital, and all you want to do is look at the baby. Just “*Gasp* I just want to stare at you while you sleep! Aw that’s so cute you have a poopie Pamper! *Gasp* The nurses will change you! Aww!” Stay in the hospital as long as you can! It’s like a resort. And then, when they let you leave the hospital, it’s funny because you put the baby in the car seat and he’s backwards and you’re going to ride in the back with him while he drives and you’re going to drive slower than you ever did before – more cautious than you ever have before! And it’s weird, cause you’re like, “You mean – I get to take him home?! You mean he doesn’t stay here? This isn’t y’all’s property?” And then when you’re home the next day, you’ll have these moments of like “Well look at you! I know you’re mine, but when are you’re parents going to come pick you up?” *laughter* It’s so strange!!

Jaci: *laughs* Yeah! Exactly! It totally feels like that! But then it all just kind of starts snapping together. Actually I think labor and delivery is the easiest part about pregnancy. Being pregnant, to me, was the hardest part. But all the other stuff? I could have babies all day long! *laughs* It’s easy. Really! Being a parent is a lot of work, but it’s the best work. And it goes by so fast! Nic and I were just talking about that yesteday. We just flew in from Arizona and we were on the plane and he goes, “Man, I can’t wait to see the guys!” And I was like, “I know! My babies… they’re BIG boys now!” And he said, “Yeah, it’s going by really fast, isn’t it?” And I said, “Yeah! Zealand’s almost two and a half and Soren’s fourteen months. It’s just so incredible!” I mean, just the other day we were talking to you guys! And Zealand was like, what? Five months? He was little! I was still holding him and nursing him and stuff. And now he’s… it’s just great. It’s crazy. It goes by fast so enjoy every moment! Even the moments where you’re frantic, cause you will be. Just enjoy it. And always calm yourself, remembering that this only happens once! Each time. Even with each kid, it only happens once. And each stage, you’ll look at it… Like, when he’s born, you’ll go “Oh my gosh, this is my favorite time!” And then at three months, “Oh no, THIS is my favorite!” cause he starts to smile! And then six months, “No, this is my favorite stage!” And it keeps going. And each stage is your favorite! And they’re all different.

Jaci: Not really. I mean, I did end up finding out, but like, I didn’t those “feelings” – y’know how women have those “feeling” like they know what it is? – Especially with Zealand. I was like, “I don’t know what this thing is! But it is making me really uncomfortable!” And then when I found out he was a little boy, suddenly it became a lot more real. We found out on both. Nic can’t handle surprises. He wants to know. He’s not good at it. He doesn’t like surprises. He’s like, “Let’s just… let’s just find out!” So we did! *laughs* I wouldn’t have minded being surprised, although the baby would have lived in yellow for the first year of his life. Poor kid! *laughs* Are you going to find out?

Jaci: And the nursery. And when you register for stuff. I mean, you don’t know if you wanna buy your blues or your reds. Or you could go with greens or pinks. It just depends. But you’ll have a blast. Just, the best advice I could ever give you… if you want to hear the best thing to ever get? *leans into the recorder* Get a video monitor! Even if people buy you those little sound ones, take ’em back to Target, and go get your video monitor. Don’t just get audio. And don’t get the cheap on. Get the expensive one. I bought the Summer brand one. Best thing I ever did! And it’s kind of expensive – it’s like a hundred and sixty dollars. But remember, you’ll keep that and… use it on your next babies, if you decide to. And you’ll use it until they’re three, four, five! I’m still using the video monitor on Zealand. When he takes naps during the day or at night. If he’s coughing – what’s going on? I’ll just all of a sudden – click! – look at it. See if it’s cool. And that’s all I gotta do. Get the video. DON’T get the sound. It’s a waste. Cause you’re going to end up going in [to their nursery] and the baby’s going to be doing something, and the baby’s going to be fine, but the baby SEES you and will start crying! Don’t make that mistake.

***We talk about her music and then it turns to parenthood again*** … Y’know, I just couldn’t tour with [my Love Out Loud] record that much because of getting pregnant with Soren. I just couldn’t work that hard! We didn’t plan it — I mean, I wouldn’t give him back, though! He’s so cute and innocent! And he’s chubby and perfect! It’s great! Both of my boys wear the same size Pampers! Haven’t done the potty training thing yet with Zealand, but that’s our next adventure when we get back from out of the country. But I’m not going to push him. They say if you push boys, it’s bad.

Jaci: Boys are different than girls. Girls want to potty train, and they’re a lot quicker to potty train. Boys are very stubborn. That’s what they say. I think Zealand’s ready for it. Finally. I think he’s just kind of getting there right now. So it’s kind of nice.

Jaci: It is! Big times. Big times in the Gonzales house! *laughter*

Jaci: Nooooo! I’m not brave enough for that.

Jaci: Yup! You do save money. It’s better for the planet… but! Is it better for mommy? *laughter*

Jaci: You’ll get it, though. If my husband can handle it, you can handle it. Just get down and get dirty. Just go with it. Don’t be scared.

Jaci: No, thank you so much for talking to me!

To read more from Jaci talking about her new music and film projects, visit Jesusfreakhideout.com.