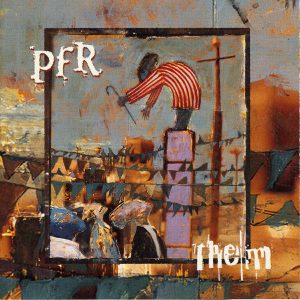 In 1996, it was a sad day when pop rock trio PFR announced their plans to disband and release one final studio album. They had paved their way into the hearts of many a CCM fan – even helping to debut a little band called Jars of Clay when that indie quartet opened for PFR a year earlier. From rebranding their self-titled album Pray for Rain to PFR (as not to be confused with another band with the same name), singing about a beloved pet’s final day on their sophomore album (Goldie’s Last Day) and taking us on a memorable merry-go-round on their junior release (Great Lengths), PFR was now bowing out with their fourth outing by telling listeners about Them.

The Minnesota three had only flirted with rock music on each album (although “Last Breath” on Great Lengths really did rock!), but on Them, they finally decided to full-on rock out with the grungy kick-off song, “Pour Me Out.” They even followed it with the angsty “Daddy Never Cried” before returning to the kind of softer pop rock fans knew them for on the wonderful “Anything” and for the bulk of the rest of the album. They even knew how to appropriately break our hearts with the album finale “Garden,” a tender ballad which seemed all the more bittersweet knowing it was basically their swan song. (Thankfully that was rendered not the case with their 1997 collection The Late Great PFR, which offered three fantastic new songs, including an appropriate goodbye in “Fare Thee Well.” And although the band would eventually reunite for one last new studio album, this still felt like the end of the band as we really knew them.)

Of all of their 90’s releases, Them might stand out as being PFR’s most timeless. The production, by Jimmy Lee Sloas is topnotch, and the sonics are just really crisp and clean. Among the aforementioned opening songs, standout tracks include the beautiful “Fight” (about fighting on our knees in prayer) – which offers a wonderful and fitting wailing guitar solo from frontman Joel Hanson to finish the song, the bass and drum-driven “Line of Love,” “Ordinary Love,” “Tried to Tell Her,” and the tender and encouraging “Say.” The title track, “Them,” may be the ugly duckling in the mix — a slow, somber and perhaps even moderately creepy downer (the beginning sets an unsettling mood) led by Patrick Andrew’s unique vocals. The song does pick up by the middle and recovers before it finishes (You gotta love Mark Nash’s drum sound on this song and all over this album, too), but the real takeaway from this song is in its lyrics. Granted, this was written 25 years ago, but it’s just as true today (especially after the past year) as it ever was:

It’s really worth reading the full song lyrics. But in a time when the Internet is one of the biggest mediums for stirring up trouble and spreading mistruths to the masses — and how much our culture ingests entertainment no matter how unhealthy its content, “Them” is as timely as ever. (And sadly so.)

Standing over my garden I look down
And disappointment overcomes me
The tears that formed are now falling from my eyes
And watering the ground around me
Lost inside this dissolution, I hear You say my name

Faith like a flower needs water and room to grow
Placed in sunlight not in shadow
Hope that the seed that is hidden will rise and bloom
From the heart of one forgiven
Love runs in the living water, I’ve heard You say my name

It’s a moving thought and a representation of the kinds of songs Christian music used to offer listeners in its heyday (before it went almost exclusively worship, although, admittedly, there’s always a place for that genre, too – just not exclusively). All of PFR’s albums were about life and pointing the listener back to Jesus, and I’m thankful for having had them to listen to in my formative years.

Although Great Lengths was probably my favorite PFR album for a long time, again, I think it’s Them that has aged the best over time. I still regularly listen to selections from all of their studio albums, and while Them may be the least lighthearted of all of their 90’s releases, it may also be their most grown-up and mature album. This is a band I still greatly miss.

Frontman Joel Hanson is still active as a solo artist, however. Feel free to check out his musical endeavors on Facebook.

We Recommend: Blindside, “About A Burning Fire”

We Recommend: Staple, “Of Truth and Reconciliation”