As I write this, my little Harvey is sitting in the living room behind me watching The Wiggles. I personally cannot stand that show, but I love that he loves it. Two of his teddy bears are watching with him: one with a University of Kentucky (my wife’s Alma Mater) sweatshirt, the other with a St. Louis Cardinals shirt and hat.

I want to share about the Cardinals, my favorite sports team in the world, and how it relates to my precious little guy.

A few years back, I learned some really important life lessons, one of which was to know and understand my identity. First and foremost, to be stronger in my identity as one who believes in the God of second chances. But there are other facets of our lives that are inextricably linked to our identities. Though maybe futile, they are vital to our souls.

For me, one of those is the St. Louis Cardinals. I know that at least back to my Great Grandpa Clore, the majority of my family (maternal and paternal sides) have been fans of the Cardinals. My Dad and his Grandpa used to sit and listen to Cardinals baseball games on KMOX-FM in the early 1960s. My maternal Grandpa and his Son went to the 1967 World Series, of which the Cardinals beat the Red Sox. My Dad and Uncle were at game 7 of the 1982 World Series when the Cardinals beat the Milwaukee Brewers. I was at game 3 of the 2006 World Series, which the Cards ultimately won over the Detroit Tigers.

All of this to say, it runs deep. When a counselor asked me what my identity was a few years back, I had a hard time answering. Beyond being a Christian, male, Nashville resident, music industry guy, I wasn’t really sure what to say. I briefly touched on being a big Cards fan and he actually stopped on that and wanted me to consider why.

The Cardinals represented me. This baseball team, of all things, truly was and is part of my identity.

When Sarah and I learned we were having a boy, I really wanted to name him Harvey, after my Great Grandpa Harve Clore.

My son is named after the man who introduced my Dad to the Cardinals.

Harvey went to his first ball game at ten weeks old. Recently, he went to his second and third. Although the greatest time wasn’t had by all this last time (he was fifteen months and the temperature was near 100 degrees), I am very proud to say he has been to at least one game for the first two baseball seasons of his young life. And it’s my goal to take him to at least one every year.

Harvey’s nursery is decorated with nearly all Cardinals items.

Some may call all of this brainwashing. I can honestly tell you I’m trying to be the best dad I can be. 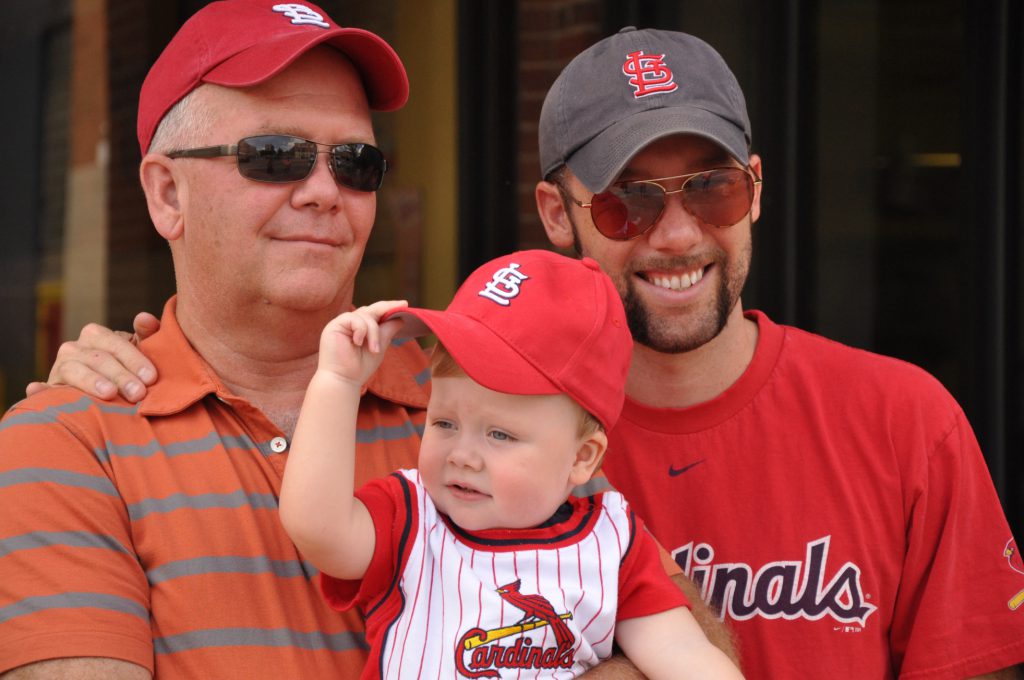 “The Coon Whisperer” by Me In Motion