One of the downsides of having a newborn around all the time now is… it’s tough to go out.

Amy and I were once the kind of couple that would often dash out to the movies or to dinner on a whim. We both work a lot, so it’s often more practical to go out to eat or to go out with friends and family. We often will go out with our Bible study group almost weekly and upon Will’s arrival, this has suddenly become much more difficult to do.

Earlier this week, Amy and I had really wanted to get out of the house to eat together for the first time since he came home, and decided to try to take him with us. He was just over 2 weeks old at this point and it was pretty late at night, but we knew of a couple restaurants that serve food late. Of course, right when we were ready to go out, Will fussed and it was time to feed and change him again. But when he settled, the little guy was ready for a nap. We secured him in his car seat, loaded it into the car, and dashed out. He fussed a bit in the seat, but when the car started moving, he slept like a champ.

When we got to TGI Fridays, Will was still asleep. I was extremely self-conscious about carrying around a potential noise bomb (ticking down an unseen, unknown timer), but the waitresses who saw him gushed over his cuteness and were more than happy to accommodate (thank God!). I tried to put his car seat carrier in a booth and the handle kept the carrier from even passing the table to get to the seat. The waitress then told us that they have “slings” especially for car seats like ours.  Moments later. she emerged with a white meshed stand and we rested the carrier securely between the sling’s legs. What ensued… was a perfectly tranquil, albeit a bit rushed, dinner. The waitress even offered to rush our order so we could eat before Will awoke. It wasn’t until after I’d signed the check that he started to stir again, so I quickly exited before he blew. Dinner out was a success! 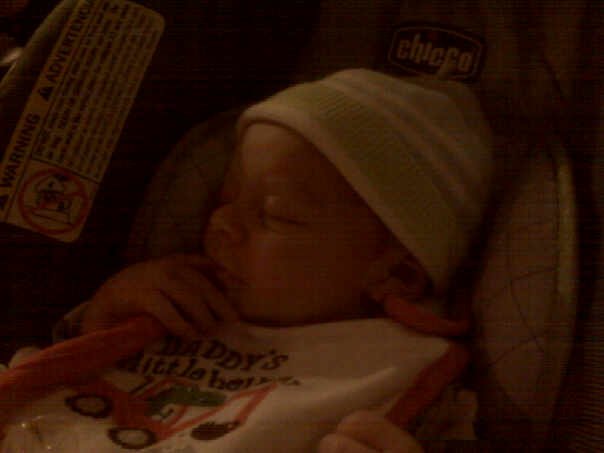 Now, yesterday was my Dad’s birthday and we met him and my mom out for lunch on his work lunch break. This time, we weren’t so lucky. Although Amy had cared for Will before leaving, he was fussy from the start. He was great during the car ride (again), and the local establishment (Sunset Grille) was accommodating for him by flipping over a high chair to rest the car seat on. We got maybe 10 or 15 minutes of peace out of Will before he started protesting vocally. Amy had to one-hand her meal while holding Will. Moments after she passed him off to me, he blew his top — having one of my many parental fears become realized… (I need to make an official list like Monk has of his phobias) being THOSE parents who bring a screaming baby into a restaurant … and my Dad eagerly came to the rescue by scooping him up and bouncing him in his arms while pacing the area near our table. I guess one out of two ain’t bad.

We’re taking him out to dinner again tomorrow, so I guess we’ll see how that goes, eh?

A Look At The Lyrics Of Jon Foreman, Part 1

We Recommend: Bride, “Snakes In The Playground”

“God is Prepared to Do the Impossible” by J.M. Farro