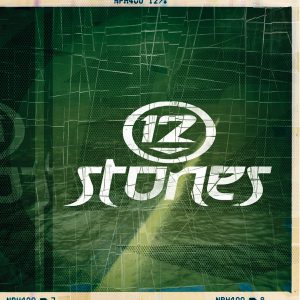 It’s been 10 long years since 12 Stones hit the scene with Wind-Up Records, who seemed to be snatching up and signing every band who sounded even remotely similar to Creed.  The band whose early sound mimicked Creed’s began an interesting path when they signed to Wind-Up — one in which they would be severely overlooked and under-appreciated by their label.  While they saw moderate success, especially in the Christian market, they had trouble breaking out into to mainstream with any real success.  Yes, they were featured in soundtracks like The Scorpion King and Electra, and Paul did win a Grammy one year after their self-titled debut release for his role in Evanescence’s “Bring Me to Life,” but it seemed as if 12 Stones went mostly unnoticed by major media outlets.

12 Stones are now preparing to release their fourth full-length album, Beneath The Scars, and their first away from Wind-Up Records.  The new album feels a little rawer in general, but the production has been stepped up a notch.  While early 12 Stones drew comparisons to Creed, the new record will surely draw comparisons to Skillet.  Paul’s voice has grown a little raspier over the years and Eric’s guitar playing, or at least writing, has seemingly improved.  And while their self-titled debut was more open about faith related issues, their new album still holds onto some spiritual themes.

Though the comparisons between 12 Stones first and latest albums aren’t really direct, it feels that they are finally starting to get where they’ve always wanted to go with their music.  While there were most definitely some gems on the debut record, it doesn’t hold a flame to the overall sound of their newest project.  No matter your feelings on 12 Stones over the years (many fans lost interest after Potter’s Field), thinking of their new album can’t help but take you back 10 years to what was one the band’s shining moments and arguably their best record overall.  That is, until now.  Though there were faults throughout the debut album, sit back and listen to tracks like “Crash,” “Broken,” “The Way I Feel,” and “My Life” if you don’t remember how much potential they had back then.  Not many bands are still releasing music after 10 years, but it’s good to see 12 Stones is back and as strong as ever.

We Recommend: Roper, “Brace Yourself for the Mediocre”

“The Power of Positive Speech” by J.M. Farro